You are here: Home / MidEastGulf / Iran plays military role in Syria at 4 levels 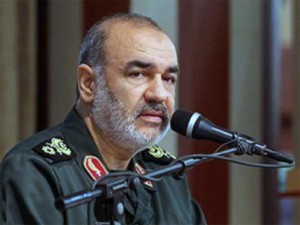 The first level is strategic, in which Iran supports the people, government, and Army of Syria and conveys its experiences to them, he said, Fars news agency reported Oct. 27.

“At this level we help them rebuild the structure of the Syrian Army,” he said. “The Syrian Army needs complementary for defense, which is the public mobilization. We introduced this into the Syrian Army and the job was carried out through advisors.”

He said the second level is operational, in which Iranian military advisors teach high and middle-ranking Syrian officers.

“The third level is tactical, in which our commanders provide consultation to Syrian commanders. And the fourth levels is related to logistics and providing equipment and education for keeping and repairs,” he pointed out.

Salami noted Iran offers the services based on a request from the Syrian government.

“If we let Syria alone with Takfiris, we would have to fight the terrorists somewhere else,” the commander said.

While Western countries have been accusing Iran of keeping a military presence in Syria, Iran says it only provides consultation to the Syrian Army and is not directly involved in the fights.

Tehran says Bashar Assad is still the legal president of Syria and should be helped against rebels who commit numerous terrorist acts in their campaign against Assad.