You are here: Home / MidEastGulf / Iran played a role in attacks on Navy ships near Yemen 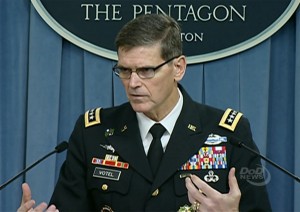 The head of U.S. forces in the Middle East said Wednesday he suspects Iran played a role in the recent missile attacks fired from Yemen against Norfolk-based ships in the Red Sea.

“I do think Iran is playing a role in some of this. They have a relationship with the Houthis, so I do suspect there is a role in that,” said Gen. Joseph Votel, commander of U.S. Central Command.

Votel made the statements in Washington at the Center for American Progress.

They are the strongest comments yet identifying a possible Iranian connection.

The destroyer USS Mason and amphibious transport dock USS San Antonio have both come under fire, although neither ship has been harmed.

Yemen is mired in a civil war between a group of Shiite Muslims known as Houthis who are backed by Iran against the government of President Abdrabbuh Mansour Hadi, who is backed by Sunni-ruled Saudi Arabia.

The attacks on U.S. ships originated from Houthi-controlled territory, but the Defense Department has stopped short of saying the Houthi rebels are responsible.

“Frankly, some of the technologies that we’ve seen there, I think are things that are associated with the Iranian threat,” Votel said.

The Norfolk-based destroyer USS Nitze responded to the repeated attacks on the Mason last week by launching five cruise missiles against three radar sites in Yemen that the U.S. believes were used to target U.S. forces.

The U.S. has previously caught weapons shipments that originated from Shiite-majority Iran and were bound for Houthis in Yemen. In April, the Norfolk-based USS Gravely intercepted a shipment of rocket-propelled grenade launchers, machine guns and rifles in the Arabian Sea.

Military officials are still trying to determine whether more missiles were fired against the Mason on Saturday. The Mason detected multiple threats and deployed countermeasures, but it’s unclear if anything was actually fired at it.

Votel said the regime of former Yemen president Ali Abdullah Saleh — who was ousted in 2012 — may also be playing a role.

“What we are trying to do is make sure we understand this as much as we can so we can properly attribute what is happening and understand how these attacks are taking place, and more importantly how the decisions are being made to launch these attacks so we can take action against that,” Votel said.