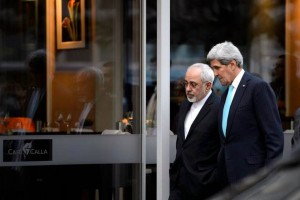 Iran and major international powers continue nuclear negotiations in Vienna on Wednesday, after blowing through a second self-imposed deadline.

Negotiators have now given themselves until Friday to come up with a comprehensive deal.

A Western diplomat in the Austrian capital said late Tuesday the talks with Iran are not “open-ended” and have just been extended for the last time.

The envoy from an unnamed country told reporters “it’s difficult to see why and how we could go on any longer. Either this works in the next 48 hours or it doesn’t.”

Senior Iranian negotiator Abbas Araqchi said “no deadline is sacrosanct,” insisting Tehran would “continue talks as long as it is necessary.”

A spokeswoman for the U.S. delegation, Marie Harf, said the United States is “frankly more concerned about the quality of the deal than we are about the clock.”

The agreement between Iran and the six powers — Britain, China, France, Germany, Russia and the United States — would cut Iran’s uranium enrichment program to keep it from being able to build a nuclear weapon. Sanctions that have wrecked the Iranian economy would be eased and eventually lifted.

But Iran is balking at Western demands for inspections of its military sites to verify it is living up to the deal. Iran also is now demanding the end to a U.N. embargo on conventional military weapons sales to Tehran.

A senior Western diplomat said a Monday conversation over the arms embargo was “very heated.”

The White House said Tuesday it knows that “significant differences” remain. But Secretary of State John Kerry said this week that all sides have never been closer toward reaching a final deal and that the talks are, for now, worth continuing.

If a deal is reached by Thursday, the U.S. Congress would have 30 days to review it and vote on whether to lift certain sanctions that lawmakers have imposed.  After Thursday, the review period becomes 60 days.