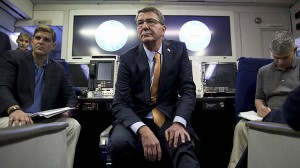 The US Defence Secretary Ash Carter arriving in Israel. has arrived in Israel on the first stop in a Middle East trip aimed at reassuring allies in the region about the Iran Nuclear deal.

He is also due to visit Saudi Arabia and Jordan.

Carter says he does not expect to he will persuade Israeli leaders to drop their opposition to the accord, but intended to explain some of its benefits.

“This is a good deal. It removes a critical element of danger and threat and uncertainty from the region,” Carter said.

“One of the reasons why this deal is a good one is that it does nothing to prevent the military option.”

Benjamin Netanyahu urged member of the US Congress to vote down the bill.

The Israeli Prime Minister called the deal a historic mistake that opens the door for Iran to construct nuclear weapons.

He pointed to the “aggressive” rhetoric of Iran’s Supreme Leader Ayatollah Ali Khameni on Saturday.

“The Iranians are not even trying to hide the fact they will take advantage of the hundreds of billions they will receive via the agreement to arm their terror machine,” he said.

“And they say explicitly they will continue their struggle against the United States and it’s allies, Israel of course above all.

From a Tehran mosque at the weekend, Iran’s supreme leader said the country’s policies towards Washington remain unchanged, in a speech that was punctuated by chants of “Death to Israel” and “Death to America.”