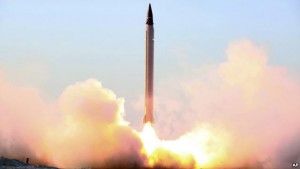 The U.S. imposed the new measures Sunday against five Iranian nationals and a network of companies with links to banned missile activity, a move that followed the lifting of economic sanctions tied to Iran’s nuclear program.

Dehqan said the ballistic missile sanctions show the U.S. is “hostile” toward Iran and he pledged to unveil new missile developments soon.

“Iran’s recent missile test, for example, was a violation of its international obligations and as a result the United States is imposing sanctions on individuals and companies working to advance Iran’s ballistic missile program,” Obama said. “And we are going to remain vigilant about it.”

The U.S. Treasury Department said the five Iranians worked to get missile components for Iran, as did the network of companies based In the United Arab Emirates and China that used third parties to try to deceive foreign suppliers and hide the identity of who would ultimately be using the materials.

The announcement came a day after the U.S. agreed to lift sanctions related to Iran’s nuclear program under an international deal reached in July, and hours after confirmation that five Americans held captive in Iran had been released.

Iranian President Hassan Rouhani said Monday that Tehran would uphold its end of the nuclear deal as long as the “other side” does, according to state news agency IRNA.

The agreement was reached in July 2015 after negotiations between Iran and the P5+1, which includes China, France, Russia, the United Kingdom, the United States and Germany.

Speaking at a meeting with Yukiya Amano, the visiting head of the International Atomic Energy Agency, Rouhani added that Iran is committed to “not to seek weapons of mass destruction.”