You are here: Home / Analysis / Iran moves toward a ‘new empire’ 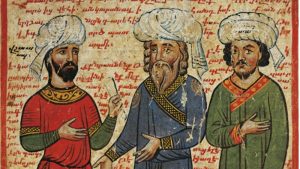 Iran’s takeover of Iraq’s strate­gic city of Kirkuk and its sur­rounding oil fields in a show of force underlined how Tehran is steadily expanding its power from the Arabian Gulf to the Medi­terranean to create a modern-day version of its ancient empires, like reported by upi.com.

At their height in 475 BC, the Per­sians ruled over an estimated 44 percent of the world’s population, more than any other empire in history.

The Iranians are turning Iraq, their longtime Arab foe delivered into their hands by U.S. President George W. Bush‘s invasion of March 2003, into an Iranian satrapy.

This was a system of governance that was based on the loyalty and obedience of regional monarchs to the central power that was devised by Cyrus the Great, founder of the first great Persian empire in 530 BC, which was ruled by the Achaemenid dynasty.

The Iranians’ armed intervention, using the U.S.-trained and -armed Iraqi Army supported by powerful Iranian proxy militias known as the Popular Mobilisation Units, to crush Kurdish moves toward in­dependence emphasized Tehran’s assiduous penetration of all levels of Iraqi society, particularly since 2003, as part of its ambitious strat­egy of dominating its Sunni Arab neighbors.

Iranian Maj.-Gen. Qassem Soleimani, commander of the elite al-Quds Force of the Islamic Revo­lutionary Guard Corps and the strategist behind the Iranian expansion, warned the Kurds not to have an independence referendum, which produced a clear majority in favor of a breakaway republic in northern Iraq.

The Kurdish leadership defied Soleimani and he could not let such audacity go unanswered. In several hours of fighting on Oct. 16, the forces he controls overwhelmed the Kurds in Kirkuk.

“We appear to have witnessed a masterful exploitation” of longtime divisions within Iraq’s Kurdish population, “a sudden and decisive turning of the screw… with hardly a shot fired,” observed roving analyst Jonathan Spyer on Oct. 18.

“This deal was only feasible be­cause of smart investments that Iran made in the politics of both Shia Ar­abs and Iraqi Kurds during previous decades, plus the judicious mixing of political and military force, an art in which the Iranians excel.

“Indeed, Iran’s influence in Iraq, both political and military, goes beyond the PMU” and the schism between the pro-Western Kurdis­tan Democratic Party and the Iran-aligned Patriotic Union of Kurdistan, Spyer wrote in the Amer­ican Interest.

“The fall of Kirkuk confirms the extent to which Iraq today is an Iran-controled satrapy and it vivid­ly demonstrates the currently unri­valed efficacy of the Iranian meth­ods of revolutionary and political warfare, as practiced by the IRGC throughout the Arab world,” Spyer declared.

The Iranians’ swift acquisition of Kirkuk underlined the sharp in­crease in Iranian operations across the region since the Tehran regime signed the July 2015 nuclear agree­ment with the United States and other global powers.

There does not seem to be any rea­son to believe that will slow down. On the contrary, the Iran-backed Houthi rebels fighting a Saudi-led Arab alliance in Yemen have begun firing ballistic missiles, supposedly supplied by Iran with crews trained by the IRGC, deep into Saudi Arabia.

That will escalate a messy war that began in March 2015 over the Arab world’s poorest country and that could ignite the smouldering confrontation between the two Gulf titans into a full-scale conflict that could eclipse the other wars ravag­ing the region.

Iran’s success in Iraq was clearly a critical setback for the Americans, who face the Iranian takeover of the northern tier of the Middle East and the consolidation of Iran’s emerging land bridge between Tehran and the eastern Mediterranean.

In war-ravaged Syria, the Irani­ans extended their control over that country’s energy resources by driv­ing the Islamic State out of much of Deir ez-Zor province in the northeast, where most of Syria’s major oil and gas fields are located and which borders Iraq.

This area is a key link in the land bridge that Tehran has been assidu­ously establishing across Iraq to Syria to create a Shia-controlled cor­ridor from the Arabian Gulf to the Mediterranean and Israel’s northern border.

Iran stands to gain economically from its massive investment of troops and treasure in keeping Syr­ian President Bashar al-Assad in power and has amassed formidable invest­ment in infrastructure that will keep Syria dependent for decades.

These imperial-style machina­tions mean that Iranian influence extends to Damascus, Baghdad, Beirut and Sana’a – approximately one-fifth of the Arab world.

Iran’s efforts at extending its fron­tiers have invariably been helped by history, particularly when the Mid­dle East is in turmoil – as it is today, arguably the worst turbulence since the collapse of the Ottoman Empire in the first world war – and it is able to manipulate internal divisions to its advantage.

For now, much of the fighting involves heavily armed proxies in Syria, Iraq, Yemen, Lebanon and Bahrain. The swelling confronta­tion between Iran and Saudi Arabia, leader of Islam’s dominant Sunni sect, is the most worrying flash­point.

Their military face-off in Yemen, Saudi Arabia’s southern neighbor which dominates the strategic Bab el Mandeb Strait, is steadily escalat­ing, with Houthi rebels firing bal­listic missiles into the kingdom in a power struggle that has engulfed other countries in the region.

Lebanon, a Saudi dependency and a sectarian minefield, was also gripped by alarm as the Iran-backed Hezbollah consolidated its military and political dominance and talk of war, possibly between Hezbollah and Israel, is on everyone’s lips.

The island state of Bahrain in the Gulf, which has a Shia major­ity ruled by a heavy-handed Sunni monarchy, is another flashpoint.

Much of the turmoil convulsing the region is the consequence of the United States’ ill-advised inva­sion of Iraq in March 2003 to get rid of Saddam Hussein and then, eight years later, withdrawing its troops, leaving the ancient land gripped by Iran-fueled turmoil.

The Americans’ bungled occupa­tion and its bewildering failure to understand the Arab world sowed the seeds of Islamic jihadist power in its fumbled attempt to impose Western democracy on the Middle East.

All this played into Tehran’s hands. By ousting Saddam, Iraq’s strongman since the 1970s and for decades the Arab bulwark against their ancient enemies, the Persians, the Americans allowed Iraq’s long-downtrodden Shia majority to seize power.

That opened the way for Tehran to launch its long-held ambition to hold sway over the whole region, empowering Shia Islam after nearly 1,400 years of Sunni supremacy.

Iran had been working toward that end since Ayatollah Ruhollah Khomeini‘s overthrow of Shah Mo­hammad Reza Pahlavi in February 1979. The founding of Hezbollah in Lebanon in the early 1980s was the first real step toward achieving a new Persian Empire and provided the model for future armed proxies.

With the Arab world in decline after the revolutionary convulsions of the “Arab spring,” along with the perceived betrayal of the United States’ disengagement in the Mid­dle East by Barack Obama’s pivot to­ward countering China, the Tehran regime saw its chance to strike.

Analysts say the clerical regime in Tehran had been planning its ex­pansionist strategy since Khomei­ni’s Islamic Revolution, which he vowed to extend across the Muslim world.

Omer Carmi, an Israeli analyst with the Washington Institute for Near East Policy, noted: “Iran has invested a great deal of money and effort into developing a complex network of allies, partners and sur­rogates worldwide in hopes that such a network would deter its en­emies from attacking the Islamic Republic while simultaneously ena­bling it to project influence through­out the region and beyond.”