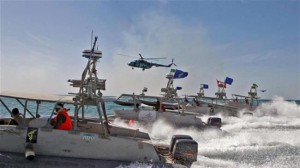 The second-in-command of Iran’s Islamic Revolution Guards Corps (IRGC) Navy says the country’s might, capability, wisdom and self-restraint have barred supporters of Daesh terrorists from spreading war to the Persian Gulf.

“If the Islamic Republic of Iran’s self-restrain did not exist, the region would be [at the risk] of fraught with clashes and insecurity in the Persian Gulf and the Strait of Hormuz by the enemies’ moves and acts of provocation,” Rear Admiral Alireza Tangsiri said on Saturday.

He warned of the “Zionist plot of Daesh” against the West Asian countries and the overt and covert support of the group’s founders for terrorists.

“Through its wisdom and rationality, the Islamic Republic of Iran has made efforts to prevent the realization of the Zionists’ scenario to spread insecurity and crime to the Persian Gulf and the Strait of Hormuz regions,” the IRGC commander said.

The supporters of Daesh, led by the Zionists, have tried even through “political suicide” and the destruction of their own reputation to spread insecurity and their crimes to the Persian Gulf and the Strait of Hormuz, he said, adding that such a conspiracy has been thwarted so far by Iran’s wisdom, tact and self-restraint.

Tangsiri said enemies are focusing on unawareness and inexperience of certain regional countries to carry out such a Zionist plot in the Persian Gulf and the Strait of Hormuz.

These regional countries have been deceived by enemies’ plots, he added.

The Iranian commander said the criminal Zionists must know that a plot which they have hatched in the region and have called Daesh would be foiled through the awareness of regional nations.

He advised the rulers of certain countries in the region to stop helping enemies implement their plots against regional nations and stressed that they should abandon their support for Daesh terrorists who are nurtured by the Zionists.

Tangsiri’s remarks came after Rear Admiral Ali Fadavi, the commander of the IRGC Navy, said on Saturday that the United States is not authorized to interfere in the affairs of West Asia and the Persian Gulf and stressed that Washington is the root cause of mischief in the region.

“They [the US] are conducting their acts of mischief in the Persian Gulf and the West Asian regions … with two objectives. Their first objective is to fulfill their own interests and the second one is to show their hostility towards [Iran’s] Islamic Revolution,” Fadavi said.

Back in August, Iranian Defense Minister Brigadier General Hossein Dehqan said the Islamic Republic’s naval forces were monitoring all movements in the Persian Gulf and would confront any vessels intruding into the country’s territorial waters.

Iran has invariably asserted that it only uses its naval might for defensive purposes and to send across the Islamic Republic’s message of peace and security to other nations.