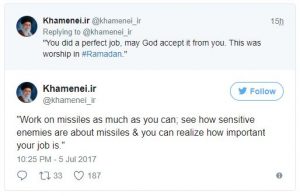 After a meeting with the commanders of IRGC which had launched missiles against ISIS target in Syria in June, Khamenei tweeted the importance of the missile program.

On June 18, Iran’s Islamic Revolutionary Guards Corps fired six missiles into eastern Syria, targeting ISIS strongholds in retaliation for the terrorist group storming the parliament and the mausoleum of Imam Khomeini on June 7, killing 18 people and injuring at least 56.

While media reports citing Israeli sources said the missiles failed in their objective and fell short of their target, Marc Martinez, a senior analyst at The Delma Institute in Abu Dhabi, writing for the National said, “the attack was a sobering moment for the region, as it suggested the accuracy of Iran’s ballistic missiles have been underestimated.”

To bring about this improvement, the Iranian parliament is considering a proposal to spend nearly $550 million to bolster security and expand the country’s missile program, the Voice of America reported.

The bill would raise the IRGC budget to $8 billion, in addition to an already approved five-year development plan that requires the government to earmark at least 5 percent of the national budget to defense, particularly for the development of the multidimensional missile program, the VOA reported.

Babak Taghvaee, a Malta-based Iran military expert, said the additional fund for missile development “would probably be spent on the domestically produced Ya-Ali cruise missile, which was long awaited for financial sources,” according to the Voice of America.

“The money would be insufficient to push Iranian missile capability close to that of Chinese or Russian weapons, but it would help the Iranians enhance their progress in terms of making missiles more accurate,” Taghvaee further said.

While the July 2015 nuclear deal didn’t impose many restrictions on Iran’s ballistic missiles programme, a non-binding U.N. resolution called on them not to create such weapons.

Iran’s increasing missile activity has rankled the U.S. and Israel, who have sought to curb it. On 15 June, the U.S. Senate voted nearly unanimously for a legislation that would impose new sanctions on Iran over its ballistic missile activity, and urged the United Nations to closely monitor Iran’s missile buildup. However, the U.N. on June 29 said Tehran was in compliance with its obligations under the international nuclear deal.

This was disputed by the U.S. Ambassador to the United Nations Nikki Haley.

However, Boroujerdi said Iran’s missile program does not run contrary to the U.N. Security Council’s resolution which endorsed the nuclear deal between Iran and great powers, Tehran Times reported. “We will continue supporting the missile program firmly,” he told ISNA in an interview published on Tuesday.