You are here: Home / MidEastGulf / Iran is installing new centrifuges at nuclear sites 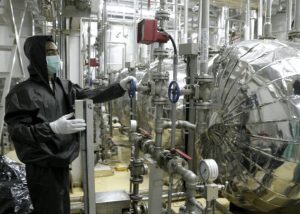 The International Atomic Energy Agency said Tehran has begin installing advanced centrifuges with uranium hexafluoride, the feedstock for centrifuges. None of the new centrifuges, however, are yet operational, it noted.

The new equipment is Tehran’s latest effort to distance itself from the 2015 nuclear agreement. Iran surpassed deal-mandated limits for its enriched uranium stockpile months ago. New centrifuges indicate the government intends to produce more, as Iranian officials have threatened.

Enriched uranium can be used to make fuel for nuclear reactors and weapons. More advanced centrifuges would allow Iran to produce the radioactive material at a faster rate.

“The Agency continues to verify and monitor Iran’s nuclear-related commitments under the JCPOA,” IAEA acting director general Cornel Feruta said in a statement Monday. “Evaluations regarding the absence of undeclared nuclear material and activities in Iran continue. … The Agency will continue its efforts and will remain actively engaged.”

Iranian leaders have said their nuclear research and production is strictly for civilian purposes.

Iranian President Hassan Rouhani has urged the remaining parties to the nuclear pact — Britain, France, Germany, Russia and China — to keep it together following the withdrawal of the United States last year. The other signatories have expressed a willingness to maintain the agreement but have resisted Iranian demands to circumvent U.S. sanctions to ensure Tehran’s economic stability.

“As long as the other side do not fulfill their commitments, we should not be expected to do so either,” Iranian nuclear spokesman Behrouz Kamalvandi said. “Our stockpile will go high from now on.”