You are here: Home / Analysis / Iran: IRGC’s generals and the new generals 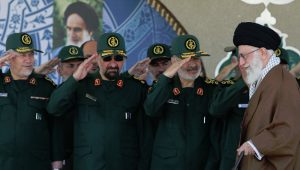 If it is possible to avoid describing the Guards as the “ruling party”, one cannot ignore the overwhelming presence of the “IRGC State” at the core of the Iranian regime and its decision-making process.

The four generals are likely to be relieved if they look at the map. Iran has the leading role in Iraq. Through its militias and in partnership with Russia, it has prevented the collapse of the Syrian regime. In Lebanon, there are those who believe that the parliamentary elections scheduled for May would consolidate, through legitimate means, the country’s presence within the Iranian Crescent. As for Yemen, the Houthis continue to assume their role in the Iranian program, undaunted by the terrible adventure into which they have driven the country.

The Guards Generals’ boasting of the Iranian influence in the four Arab capitals does not eliminate the bad conditions witnessed in the respective countries.  Iraq, where Iran is strongly present in the decision-making process, is unfortunately a broken country confused between Sunnis and Kurds, despite its significant victory over “ISIS”, with the support of the “International Alliance”.

Syria, where Moscow and Tehran have managed to salvage the regime, has turned into a jungle of flags of states and militias in a rare and unprecedented abuse of a fractured country. It is certain that any viable political solution in Syria will lead to a decline in the role of Iran, which was completely dominant before the outbreak of confrontations in this country. It is hard to believe that Lebanon is at its best. As for Yemen, nothing suggests that this challenging country will be an easy celebration for the Houthi adventure.

In contrast to breakthroughs and achievements, it is difficult for the four generals to ignore the fact that recent days have revealed that the Iranian Revolution is beginning to suffer from the symptoms of turning forty. The open letter addressed by prominent opposition figure Mehdi Karroubi to the spiritual leader is very significant. He said: “I urge you, before it is too late, to make room for structural reforms of the regime with accurate diagnosis of the country’s political, economic and foreign situation, and through the evaluation of policies adopted in recent years.”

One day later, the regime received a new warning; this time from President Hassan Rouhani. “All the leaders of the country must listen to the demands and wishes of the people. The former regime lost everything, because it did not hear the voice and criticism of the citizens,” he stated.

It is clear that Rouhani and Karroubi are aware of the growing resentment in the Iranian street and the disappointment of new generations with domestic policies and regional adventures that drain the energies of the country and put them in constant conflict with the people of the region and most of the world.

The two men realize that the nuclear deal was not a final salvation for the regime; and that the US administration is preparing to impose a painful package of sanctions that will deprive Tehran of reaping the fruits of the Obama agreement, because it will convince investors that the time to return to Iran has not come yet.

The sanctions are aimed at making Iran pay the price of violating countries, disrupting stability, supporting terrorism, manufacturing ballistic missiles and threatening the security of waterways.

Time is the fiercest enemy of revolutions. It caresses them and later entangles them. It sympathizes with them and then attacks them. It tests them and destroys their auras. Time is ruthless. It separates fantasies from dreams and drags them into the Court of Numbers. The peculiarity of a revolution is not enough to immunize it against fixed rules. Change is the only salvation. Refusing to reconcile with time is the shortest way to collapse, no matter how late it is.

There are no ideas that fit all times and places. The ideas are the fruit of their time and carry with them the features of the place as well. Time, like a river, carries with it new and different ideas, and question marks. The “KGB” Empire was unable to protect Lenin’s revolution from committing suicide. The massive Communist Party of China (CPC) was unable to protect Mao Zedong’s revolution from the needs and winds of the times. Nothing suggests that Iran’s Revolutionary Guards will succeed where others have failed.

In this month, 40 years ago, the Iranian Revolution achieved victory, reverberating across the region and the world; a revolution that was born from outside the ideology of these two camps. Back then, Lenin’s party resembled Lenin himself, and Mao’s party reflected Mao’s beliefs. But time has changed, and here is Khomeini’s revolution facing the troubles of turning forty, in a world very different from the one in which it was born.

The IRGC generals must know that there are new generals, who represent more threat to the Iranian regime than US generals. Generals, who came from scientific, technological and digital revolutions… Generals, who cannot be intercepted at the border, nor can they be faced by rockets and the mobilization of militias. The Iranian youth is more likely to be turning towards these generals they see in their smartphones. They want to be neutral citizens in a normal country busy with investment and stability. Here I mean Google Gen. Larry Page, Microsoft General Satya Nadella and his predecessor Bill Gates, Amazon General Jeff Bezos, Facebook General Mark Zuckerberg, Apple General Tim Cook and Telegraph General Pavel Durov.

If the Iranian revolution fails to capture the deep meaning of the pains of turning 40 in a world of change, Khamenei must truly reflect on what time has done with the revolutions of Lenin and Mao.