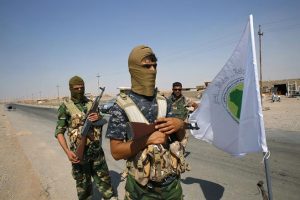 The Iranian forces, part of the Quds Force of Revolutionary Guards, are said to be working under the wings of the Shi’ite militia groups of Hashd al-Shaabi, also known as the Popular Mobilization Forces.

Former Iraqi Prime Minister Nouri al-Maliki “is currently working to form several tribal councils in Nineveh that are linked to him and directly supported by Iran’s Revolutionary Guards and Supreme Leader Ali Khamenei”, said Sheikh Muzahim Huwet, the spokesperson for the Arab tribes in Nineveh.

“They seek to win the largest number of parliamentary seats in Mosul and also the majority of seats at the governorate’s council, in order to factionalize the Sunni Arabs, to Shi’itize Mosul and fight the Kurdistan Region,” Huwet added.