You are here: Home / MidEastGulf / Iran increases Gulf patrols after close call with US Navy 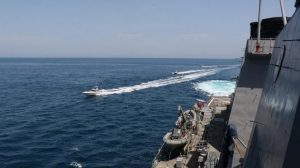 The Iranian Revolutionary Guards Corps announced Sunday they were increasing their patrols in the Gulf after their naval vessels had come close to US navy and Coast Guard ships, like reported by aawsat.com.

The US military said 11 IRGC vessels had come close to their ships in what it described as “dangerous and provocative” moves.

The Guards’ statement on Sunday, which said Iran will give a decisive response to any mistake by the United States in the Gulf, provided the first confirmation of the incident.

The Guards also said it would secure the passage of Iranian ships and combat fuel smuggling.

“We advise the Americans to follow international regulations and maritime protocols in the Gulf and the Gulf of Oman and to refrain from any adventurism and false and fake stories,” the statement said.

“They should be assured that the Revolutionary Guards navy and the powerful armed forces of Iran sees the dangerous actions of foreigners in the region as a threat to national security and its red line and any error in calculation on their part will receive a decisive response.”

At one point, the Iranian vessels came within 10 yards of the US Coast Guard cutter Maui, the US military said.

In its statement the Guards navy denied the US military’s account of the incident and said the US had acted unprofessionally.

While such incidents occurred occasionally a few years ago, they had stopped. But tensions between the two states spiked this year after the United States killed Qassem Soleimani, the head of Iran’s Quds Force, in a drone strike in Iraq.

Iran retaliated on January 8 with a rocket attack on Iraq’s Ain al-Asad base, where US forces were stationed. No US troops were killed or faced immediate bodily injury, but more than 100 were later diagnosed with traumatic brain injury.