You are here: Home / MidEastGulf / Iran in flames: “Down with the dictator”

Violence broke out across Iran last night after protesters were attacked with tear gas by security forces during strikes over high prices, power outages and water shortages as the regime refused to enter talks with US President Donald Trump, like reported by express.co.uk 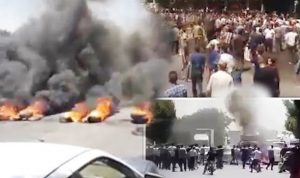 As night settled in Iran yesterday, protests that began on Tuesday afternoon continued across the impoverished country – with shopkeepers, market vendors, farmers and truck drivers taking to the streets in protest about worsening conditions.

Dozens of store owners in the area have closed their shops and are on strike after the rial’s value dropped by 120 percent in the last six months alone.

Iran has also been hit by falling salaries set against the rising cost of living, while water shortages and power outages have also hit the embattled country.

Videos obtained from the protests show protesters are not afraid of the regime’s repressive forces and are confronting them despite heavy security presence.

Protesters chanted the game is over for both factions of the regime, both the “reformists” and the “hardliners”.

In one clip, young protesters are seen being crippled with tear gas as the mostly peaceful protests took a violent and dark twist – with protestors later setting tyres and police motorbikes on fire.

In another video, demonstrators can be heard chanting “down with Khamenei” and “Our enemy is here, they are lying when they say it is the US”.

A separate video also shows as the protesters chant: “Guns, tanks, are no longer effective, mullahs should get lost.”

Protesters added chants of “down with the dictator”, as security forces charged at the crowds.

According to local reports, a young boy who had attended the protest along with his mother was injured amid the heavy handed crackdown.

Others were heard saying “any Iranian who remains silent is committing treason” as they called on their compatriots to support them in their cause.

Maryam Rajavi, the President-elect of the Iranian Resistance, saluted the “brave people” of Karaj, Isfahan, and Shiraz following the protests this week.

In a comment provided to Express.co.uk, she said the source of all the miseries of the Iranian nation is the religious dictatorship, which has wasted the wealth and human resources of our homeland.

The statement continued: “Now, the world is witnessing that despite the massive repression by the religious fascism, the Iranian people’s uprising is constantly on the rise.

“It has cornered the absolute rule of the clergy and heralds the arrival of the spring of freedom to our captive country.”

She also tweeted: “The Iranian people’s nationwide uprising is growing by the day. Hail to the peoples of Isfahan, Gohardasht of Karaj, and Shiraz.

“The time has come for rising up. The persistence of your uprising has beset the mullahs’ religious dictatorship.

“Today, the world can see that the voice of Iranians cannot be silenced despite massive repression, and their uprisings are carrying on until victory.

“These are the blazing flames of a resistance with over 100,000 martyrs, flaring up in the streets after forty years.”

Military officials slammed the proposals as “worthless” and “a dream”, saying Mr Trump’s words contradict his actions of reimposing sanctions on Tehran.

Iran’s foreign minister said that Washington should blame itself for ending talks with Tehran when it withdrew from the nuclear deal.

“US can only blame itself for pulling out and leaving the table…Threats, sanctions and PR stunts won’t work,” Mohammad Javad Zarif said in a tweet.

While President Rouhani condemned Mr Trump’s repudiation of an international nuclear deal reached in 2015 as “illegal”.

“But the reality on the ground is that the Iranian regime’s financial corruption, misuse of public funds, the widespread banking crisis, and the haemorrhaging of billions of dollars of the taxpayers’ money and of the national wealth on militia and terror groups are among the major reasons behind the present currency and economic crises.

“In fact, these problems are systemic and exist deep in Tehran’s economic and political infrastructures.

“That’s why the economy and people’s living standards have worsened since 1979. That’s why rial has plummeted continuously for the last 39 years — since the establishment of the Islamic Republic — from nearly 70 rials a dollar in 1979 to approximately 110,000 now.

“The negative trend will most likely continue as long as the Iranian regime is in power.

“US policy on Iran has definitely put pressure on the Iranian leaders and emboldened the Iranian people to come to the streets and demonstrate.

“Trump can give moral support to the Iranian people by stating that his administration supports the protesters’ demands for justice.

“He can pressure the international community to hold the Iranian leaders accounts for cracking down on the protesters, shutting modes of communication and abusing human rights.”

President Trump pulled the United States out of the multilateral deal , which was concluded by the Obama administration, in May.

The former businessman denounced the agreement as one-sided in Iran’s favour.

But on Monday, he said he would be willing to meet Rouhani without preconditions to discuss how to improve relations.

Speaking exclusively to Express.co.uk, Shahin Gobadi of the Foreign affairs Committee of the NCRI said the continuation and frequency of protests have one clear message.

He told Express.co.uk: “The Iranian people are determined to bring about a regime change and they are not going to stop at anything short of that. The prospect for the mullahs to find a way out is becoming dimmer by the day.

“This is why the regime’s senior officials keep warning about the bleak prospects that loom on the horizon for the regime and the growing role of the resistance.

“As such, the regime’s official in charge of dealing with “soft warfare” stated on August 1, that 90 percent of the strikes and calls for protests are the result of activities of the “counter-revolutionaries”, ie the Iranian resistance.”

Last month, thousands of Iranians flocked to Paris for the 10th annual Free Iran rally – with speakers such as Trump’s close allies newt Gingrich and Rudy Guiliani speaking in favour of freeing Tehran from the “murderous” Reouhani regime.

Mr Gobadi added: “It is time for the European countries to see the fast-moving realities in Iran and forgo any deals with the Iranian regime.

“Rather they should hold the clerical regime accountable for all its malign activities and side with the Iranian people and their aspirations.

“We would welcome any serious and tangible retreat by the mullahs because that would ultimately serve the interests of the Iranian people and the resistance units to bring down the regime and to establish democracy.

“But as the regime’s supreme leader, Ali Khamenei, has said time and again the regime is incapable of any major change of policies and change of direction.

Iranian lawmakers have given President Hassan Rouhani one month to appear before parliament to answer questions on his government’s handling of Iran’s economic struggles.

It is the first time parliament has summoned Rouhani, who is under pressure from hardline rivals to change his cabinet following a deterioration in relations with the United States and Iran’s growing economic difficulties.

Lawmakers want to question Rouhani on topics including the rial’s decline, which has lost more than half its value since April, weak economic growth and rising unemployment, according to semi-official ISNA news agency.

Rouhani, a pragmatist who reduced tensions with the West by striking a nuclear deal in 2015, is facing a growing backlash since U.S. President Donald Trump pulled out from the pact in May and said he will reimpose sanctions that seek to throttle Iran’s economy, including its lifeblood oil exports.

ISNA said lawmakers also want to Rouhani to explain why, more than two years after the landmark deal, Iranian banks still have only limited access to global financial services.