You are here: Home / MidEastGulf / Iran holds funeral for troops killed in Syria 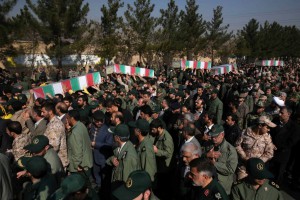 Iran has held a funeral for six soldiers, including a senior Revolutionary Guard commander, who were killed while fighting alongside President Bashar Assad’s forces in Syria.

State TV says Gen. Mohsen Ghajarian and five others were killed in northern Syria while battling the Islamic State group and Syrian rebels. A major Syrian government offensive is underway near the northern city of Aleppo.

Iran says it has sent military advisers to help Assad’s forces but denies sending any combat troops into Syria. A number of Iranians have been killed in recent months, including several high-ranking commanders.

The Guard’s top commander, Gen. Mohammad Ali Jafari, said at the funeral Saturday that Iran has no plans to send combat troops to Syria.

Iran has defended the intervention in Syria, saying it is defending Shiite shrines there. The Assad family hails from Syria’s minority Alawite community, an offshoot of Shiite Islam.

Iran has been a key ally of Syria’s throughout the five-year uprising.