In order for the Syria peace negotiations to yield results, a dividing line must be drawn between notorious terrorist groups and the other parties, secretary-general of the Lebanese Hezbollah resistance movement said, like reported by tasnimnews.com 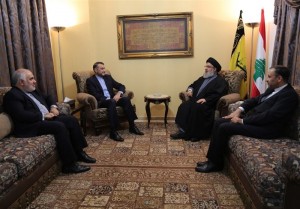 Any success in the political negotiations to end the crisis in Syria hinges on making a distinction between the known terrorists and the other groups, and on the serious fight against terrorism, Seyyed Hassan Nasrallah said at a meeting with Director General of International Affairs at the Iranian Parliament Hossein Amir Abdollahian.

Nasrallah also noted that the Zionist regime of Israel spares no effort to undermine Islam and damage the Muslim nations, stressing that Hezbollah continue to vigorously defy Israel’s ambitious policies.

The Lebanese and Iranian officials further discussed the latest regional developments, with an emphasis on the political settlement of conflicts in Syria, Yemen and Bahrain.

The meeting came after conclusion of the most recent round of Syrian peace talks in Astana, Kazakhstan.

In a joint statement after the meeting, Russia, Iran and Turkey reiterated that there is no military solution to the Syrian war and that only a political process can resolve the crisis.

The states also reaffirmed their commitment to the independence and territorial integrity of Syria.