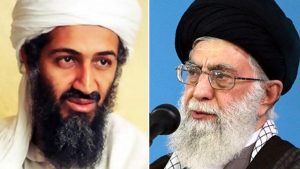 A recent report by the United Nations indicates that terror group al Qaeda is having a resurgence around the world due in part to help from Iran, like reported by freebeacon.com.

The report was delivered to the Security Council this week, Fox News reports, and said one of the world’s biggest threats will come from al Qaeda under the leadership of Hamza bin Laden, Osama bin Laden’s son.

Al Qaeda has grown mostly in Somalia, Yemen, and South Asia, where it has a stronger presence than ISIS.

The report also says that Iran is allowing al Qaeda leader Aiman al-Zawahiri to work and coordinate efforts from their country, as noted by the Tower.

“Al-Qaida leaders in the Islamic Republic of Iran have grown more prominent, working with Aiman al-Zawahiri and projecting his authority more effectively than he could previously,” the report says.

Iran has been criticized in the past by western countries for supporting terrorism, including funneling money and weapons to terrorist groups around the world.

Additionally, the report states that ISIS is moving away from its attempts at being a formal state, and instead is moving to more covert activities around the world. ISIS has lost significant ground in Iraq and Syria, leading the organization to find new ways to continue its objectives.