You are here: Home / MidEastGulf / Iran has 1000s of Afghans fighting in Syria in support of Bashar al-Assad 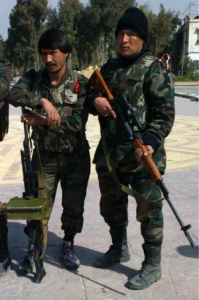 Iran has sent thousands of Shia Afghans to Syria to fight for support of the regime of Bashar al-Assad.

According to a report published by the Voice of America (VOA), these Afghans are the illegal immigrants of Iran. The report citing western media shows the number of these fighters between 10,000 to 12,000.

It also cites Human Rights Watch (HRW) as saying that these Afghans have been sent to Syria for fighting against their willing. Meanwhile, it mentions Iran as saying that the Afghan citizens have willingly accepted to fight.

The report adds that Iran has promised citizenship to these fighters and improving the living conditions of their families.

Peter Bouckaer who is the HRW’s emergencies director and an expert in humanitarian crises is quoted in the report as saying that besides offering attractive packages to Afghans, Iran threatens them by expulsion if they do not accept to fight in Syria.

The report quotes smith, a researcher at the University of Maryland, as saying that each of these fighters are paid from $400 to $600 monthly wages.

Smith has further said that Afghan refugees who are not accepting the offer are being threatened with imprisonment.

According to Smith, Afghans imprisoned in Iran are also sent to Syria for fighting after they are released.