You are here: Home / MidEastGulf / Iran harasses US ships, submarine in Strait of Hormuz 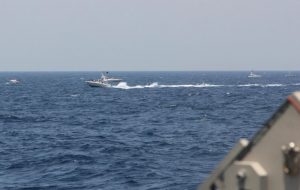 A U.S. Coast Guard cutter fired two rounds of warning shots at a group of Iranian fast boats after what the Pentagon described as an “unsafe and unprofessional” encounter in the Strait of Hormuz, like reported by voanews.com.

“When you’re in the strait, there are certain limits to your ability to maneuver,” Kirby said.

A statement from the U.S. Navy 5th Fleet on Monday said the 13 IRGCN boats broke into two groups, with two of the boats approaching the U.S. vessels at speeds in excess of 32 knots, “with their weapons uncovered and manned.”

The statement said two of the U.S. ships, the USS Squall and the Maui, made multiple attempts to hail the two boats, including repeated bridge-to-bridge verbal warnings and five short blasts of the ship’s horn — the internationally recognized signal for danger — before the warning shots were fired.

This is the second time in recent weeks that a U.S. vessel fired warning shots at Iranian boats after what the U.S. termed an unsafe encounter at sea.

The USS Firebolt, a navy patrol ship, fired warning shots at a group of three IRGCN fast boats back on April 27, after encountering them in the North Arabian Sea.

In that incident, the Iranian fast boats came within 62 meters of the USS Firebolt after several failed attempts to hail the Iranian vessels.

The U.S. Navy also complained last month about a third incident in early April, when an Iranian naval vessel, accompanied by three fast attack craft, harassed two other U.S. ships, coming within 64 meters before pulling back.

Despite the concern, U.S. defense and military officials have been hesitant to lay blame on the Iranian government.

“The activities we typically see from the IRGC Navy are not necessarily activities that are directed by the supreme leader or from the Iranian state,” U.S. Central Command’s General Kenneth “Frank” McKenzie told a virtual audience last month. “Rather (they are) irresponsible actions by local commanders on the scene.”

“We’re very careful to ensure that we don’t get into a provocative cycle as a result of that,” McKenzie added. “Luckily, our guys are pretty good. … They’re very mature and they’re able to de-escalate the situation.”