You are here: Home / MidEastGulf / Iran, Hamas and Islamic Jihad call for “uprising” after UAE-Israel deal 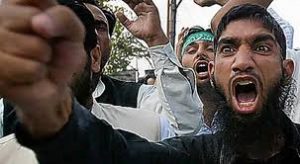 The Middle East needs an uprising similar to the Islamic Revolution in Iran that will unite the “resistance” of the Islamic community against a “culture of defeat” that has affected Arab regimes, Palestinian Islamic Jihad’s representative to Iran recently said. Mehr News in Iran reported the discussion with Naser Abu Sharif of Islamic Jihad, which is backed by Iran. A Hamas representative named Khalid al-Qaddumi was also present, the report said according to jpost.com.

The Mehr News discussion attacked the “betrayal of the UAE in the signing of the agreement to normalize relations with the Zionist enemy.” Qaddumi said that the agreement has crossed a red line and that Israel is now more secure than in the past.

The extremists asserted that Israel was a like a criminal running free without anyone to put it on trial. He pointed out that when Egypt had signed a peace deal with Israel the Arab League had suspended Egypt and moved its headquarters temporarily from Cairo. Egypt was readmitted to the Arab league in 1989.

Hamas is outraged, the representative told Iran. “Nations and our educated class have a great responsibility in questioning friendly countries for normalizing relations.” He said that the “Zionist regime is an enemy and will remain an enemy. The destiny of the [Zionist] regime is destruction and decay and whoever has a relationship with it will be transferred to the dustbin of history.”

The Islamic Jihad representative connected the current state of affairs in the Arab world to the era of 1979 prior to the Islamic Revolution in Iran and also said the region needs a revolution like the one brought by “Imam Hussein,” who is venerated by Shi’ites. Islamic Jihad is a Palestinian group but often acts as an Iranian proxy and although it is made up of Sunnis it has adopted Iran’s Shi’ite iconography in these statements.

“Today the American project is a project of infidels,” said Abu Sharif. “Unfortunately the Arab governments are being won over by the projects of the United States and the Zionist regime….the governments are corrupt without exception.” He called for a revolution in the region against the recent trend of normalization of ties.

Overall the comments appear to represent desperation on behalf of Iran and its allies among the Palestinians. The attempt to try to rekindle a revolutionary spirit like in 1979 or to encourage the Arab League to react as it did in 1979 is far-fetched. Nevertheless the interview represents Iran’s attempt to spread slander against the UAE and also to encourage discord or protests in the region. So far there have been few protests against the UAE-Israel agreement.