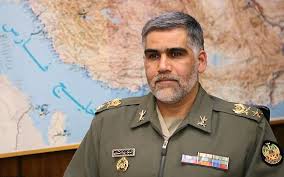 A senior Iranian military official told parliament Sunday the armed forces need a bigger budget to confront the ISIS whose influence is growing in neighboring countries.

“We have to face a new threat in the region. Terrorist groups are close to our borders,” General Ahmad-Reza Pourdastan who commands Iran’s ground forces told parliament, media reported.

“Today we see the presence of Daesh in Afghanistan and Pakistan,” he said, using the Arabic acronym for ISIS.

Iran’s army and its elite Revolutionary Guards must be strengthened to be able “to buy tanks, transport vehicles and to overhaul our helicopters,” he was quoted as saying.

ISIS, which has seized chunks of Syria and Iraq to the west of Iran has also gained a foothold in its eastern neighbours Pakistan and Afghanistan.

In May, ISIS claimed its first attack in Pakistan, where pistol-wielding gunmen stormed a bus carrying members of the minority Shiite Ismaili community, killing at least 43 people.

The Iranian general, who warned that “the battle is on the ground”, did not say by how much the defence budget should be increased.

For the fiscal year ending in March 2016, the defence budget was increased by more than 30 percent to reach some $10 billion dollars. In addition, the armed forces receive $1.2 billion from sovereign funds.

Pourdastan told parliament that when IS launched its offensive in Iraq in June last year jihadists advanced to Jalula, just 40 kilometers from the Iranian border.

“In less than three days, we sent five brigades to the borders and our reconnaissance helicopters penetrated 40 kilometers into Iraq,” Pourdastan added.

Shiite regional power Iran has military advisers in Iraq and Syria and provides financial and military support to the governments of both countries in their fight against the Sunni extremists.