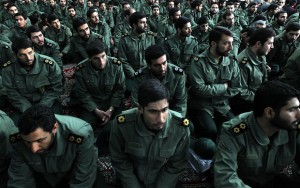 An Iranian general has urged volunteers to travel to Syria to fight Sunni rebels, as the Syrian regime of Bashar al-Assad continues to lose ground.

“The Iranian Supreme Leader does not want to send armies to Iraq and Syria at the moment but he confirms that military commanders [have been] sent so that their capabilities may be put to use in those two countries,” he said, according to Iranian state media.

However, he urged Basij recruits to “volunteer” to join the battle in Syria, saying that he would personally travel to fight there if need be.

“If you do not volunteer to fight in Iraq and Syria, I will go myself, and I will martyr myself in the defense of [the shrine] of Sayyida Zeynab [in Damascus] or the Shia shrines in Iraq,” Iran’s Rahyab News quoted him as saying, referring to important Shia religious sites.

The Basij is a volunteer militia comprised of Shia fanatics and loyalists of Iran’s Supreme Leader Ayatollah Khamenei, which among other things is often used to crush opposition demonstrations and generally impose order in the Islamic Republic. It was initially founded as a civilian volunteer force during the bloody Iran-Iraq war during the 1980s.

With the regime of Bashar al-Assad, a key Iranian ally, rapidly losing ground in a series of defeats to rebels in both the north and south of Syria, Tehran has stepped up its already strong support for the regime while reportedly advising a tactical retreat to secure key areas including the capital Damascus.

The latest blow to pro-Assad forces came Thursday morning, as rebels announced they had seized a military airport in Sweida Province, in southwestern Syria. That defeat came just two days after rebels seized a military base in southern Daraa Province.

Meanwhile in the north, an Islamist alliance led by Al Qaeda’s Nusra Front has seized almost all of Idlib Province, including the provincial capital, while ISIS continues to expand its control as well.

Nowi-Aghdam warned Basij recruits that the war in Syria was crucial to the very survival of Iran.

“If we do not [stop] ISIS in [Iraq and Syria], we will have to fight it in Khuzestan and Tehran,” he said, “I am an ambassador of the resistance and I came here… to warn you of the [potential] future.”

Iran has been a key backer of the Assad regime, providing arms, training and advisers to both regular army forces and pro-regime paramilitaries. Several Iranian Revolutionary Guards soldiers have been killed fighting on the front lines, belying denials by Tehran that it sent any official combat troops.

Iran most recently denied reports it was sending 7,000 troops to help defend Damascus, as rebels close in on the capital.