You are here: Home / MidEastGulf / Iran-flagged ship targets US Navy with laser 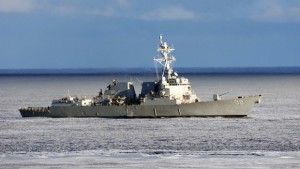 A US Navy ship and helicopter were repeatedly targeted by a laser device on board an Iranian-flagged merchant ship beginning on Sunday in the Gulf of Aden, according to a US defense official, CNN reported.

No US personnel were hurt or equipment damaged in the incidents which ended on Wednesday, the official said.

The bridge area of the USS Forrest Sherman and one of its helicopters were targeted, the official said.

The Navy is not certain exactly what the device was, or how powerful it was, but believes it was not of industrial or military grade quality since there was no damage. The incidents are viewed at this point as harassment from the Iranians.

The incidents took place in international waters off the coast of Yemen. The Navy ship was “conducting routine maritime operations,” the official said. But it is well understood that U.S Navy warships patrol the region looking for any indication of Iranian weapons smuggling into Yemen.