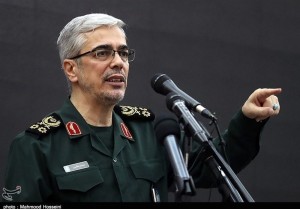 “Cyber battles can cause extensive damages, and thus, have a paramount place in the contemporary world, and we have the necessary expertise in this field,” the top commander said at a cultural ceremony in Tehran on Thursday.

Stressing the need for readiness for any confrontation in future, Major General Baqeri hailed “full security and calm” in Iran among the countries that are gripped by wars and insecurity.

The commander further highlighted Iran’s precious experience of fighting an Iraqi imposed war in the 1980s and the country’s self-reliance, adding, “Under such circumstances, no aggressor will dare to invade the country.”

Iran has in recent years made great headways in defense against cyber-attacks.

In June, Leader of the Islamic Revolution Ayatollah Seyed Ali Khamenei cautioned against the enemy’s push to undermine Iranian culture through the cyber space, referring to new cyberspace tools as instruments for “engineering of data” and “West’s dominance on the nations’ culture”.

“Of course these tools could prove helpful. But they must be devoid of the enemy’s dominance and we must act so as the cyberspace would not serve as an environment for the infiltration and cultural dominance of the enemy,” the Leader underlined.