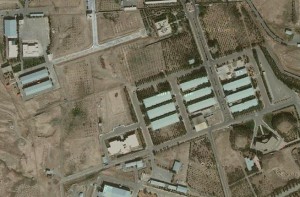 The United Nations’ International Atomic Energy Agency reported Thursday that while Iran has largely been complying with agreements on curtailing its nuclear program, it has built an extension to its military facility at Parchin.

A segment of the confidential report seen by the Reuters news agency says the Islamic Republic’s activity at the site since February 2012 has likely undermined the IAEA’s ability to “conduct effective verification.”

“Since [our] previous report [in May], at a particular location at the Parchin site, the agency has continued to observe, through satellite imagery, the presence of vehicles, equipment, and probable construction materials. In addition, a small extension to an existing building appears to have [been] constructed,” the report was quoted by Reuters as saying.

The report covers Iranian activity from before the signing of the long-term nuclear agreement between Iran and six world powers in July.

Activities at the site since 2012, during a time Iran stonewalled IAEA requests to visit the site or receive information on it, have undermined the agency’s ability to verify intelligence suggesting that Tehran conducted tests relevant to nuclear bomb detonations at the site in the past, diplomats said Thursday.

Specifically, the IAEA believes Tehran may have experimented there with high-explosive detonators for nuclear arms.

On Tuesday, IAEA Director-General Yukiya Amano said that his agency received large amounts of information from Tehran but it was too early to say whether any of the information is new.

Three weeks ago, Iranian Foreign Minister Mohammad Javad Zarif said his country was fixing up roads near the Parchin site, dismissing Western reports based on satellite imagery that Tehran was engaged in a hurried clean-up of the facility.

“We have announced that road construction operations are being carried out at Parchin,” Zarif told reporters in Tehran, according to the semi-official Fars news agency. Claims to the contrary, he said, were “lies,” he said. “All allegations against the Islamic Republic of Iran in this ground have always been baseless,” Zarif added.

The IAEA plans to send inspectors to Parchin soon as part of the nuclear agreement. Access to the site would follow years of refusal by Iran.