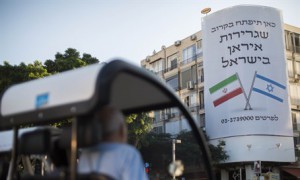 A billboard in central Tel Aviv announcing the opening of an Iranian embassy that met with disbelief and curiosity turned out to be a hoax, organizers of the eye-catching stunt have revealed.

“Opening here soon – Embassy of Iran in Israel,” proclaimed the five-storey tall sign emblazoned with the Iranian and Israeli flags this week.

Posts on Facebook suggested that the billboard could be an art installation or a private “peace” campaign by Israelis who had immigrated home to the Jewish state from Iran.

But the truth was revealed as a massive publicity stunt in a statement Thursday from the makers of a new Israeli film comedy about a nuclear conflict between Tehran and Israel.

The film is to center around an Israeli and an Iranian girl who prevent nuclear war, with the filmmakers calling the movie “pro-peace and optimistic.”

Iran severed diplomatic relations with Israel in the wake of the 1979 Islamic revolution, which overthrew Iran’s pro-Western shah and installed a theocratic regime that does not recognize Israel.

“Our positions against the usurper Zionist regime have not changed at all; Israel should be annihilated and this is our ultimate slogan,” Sheikholeslam said.