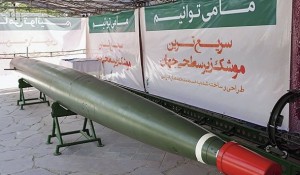 Iran displayed its Hoot high-speed rocket-torpedo for the first time during an exhibition by the naval wing of the Islamic Revolution Guard Corps (IRGN) on 3 October.

The imagery confirmed long-held suspicions that the Hoot is identical to the VA-111 Shkval supercavitating torpedo that was developed by the Soviet Union. It has the same eight jet nozzles at the rear and four stabilisation fins that pop out of the torpedo’s body.

Launched from a standard 533 mm torpedo tube, the rocket-powered weapon creates an air pocket around itself, thereby reducing drag and enabling it to reach speeds of up to 200 kt (370 km/h).