An Iranian Army Ground Force commander said the country has developed an advanced generation of military tank armor, according to tasnimnews.com 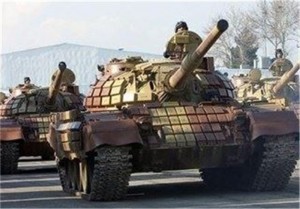 In an interview with Tasnim, General Massoud Zavarei, in command of an Army Ground Force organization working on military research and self-sufficiency, said the country has manufactured a new type of tank armor even more advanced than Kontakt-5.

While Iran is now fully capable of producing Kontakt-5, an armor used in T-90 tanks produced in the 1990s, the Army has acquired the expertise to manufacture more advanced models as well, he explained.

Kontakt-5 is a type of explosive reactive armor (ERA) originating in the Soviet Union. Such kind of armor explodes and deflects the blast of a shell, making the tank invulnerable to antitank weapons.

But ERA consists of blocks of high explosive packed in small steel boxes that are draped like links of chain mail, usually over the armored top and flanks of a tank. Any box hit by a missile explodes. The blast is not supposed to damage the tank, but is designed to disperse the penetrating jet of gas and metal coming from the antitank missile, making it harmless, according to New York Times.

Spent boxes are easily replaced in the field. In any case, the chances during a battle that a second missile will hit exactly the same spot are small.