You are here: Home / MidEastGulf / Iran deported over 8000 Afghan refugees 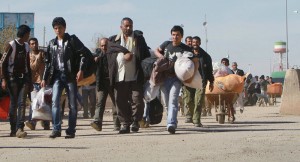 United Nations (UN) has said that Iran has deported at least 8000 Afghan immigrants in the beginning of the ongoing year.

According to Alarabiya, UN has expressed concern over the extradition of Afghan immigrants in the current situation as they do not have any financial and economic aids to support themselves.

UN has also said in the statement that it is worried over the expelling of illegal Afghan migrants by Pakistan.

Millions of Afghans fled to Iran and Pakistan in the 1980s to flee a bloody anti-Communist insurgency. At the peak of the war, roughly 5 million refugees lived in Pakistan and nearly 4 million in Iran.

Currently, Human Rights Watch estimates about 2 million Afghans still live in Iran as unregistered refugees – some having returned to Afghanistan only to come back once again to Iran driven back by the lack of jobs and a deteriorating security situation in their homeland.

Since 2002, about four million Afghans – three million from Pakistan and about 850,000 from Iran – have been repatriated to Afghanistan with UN help, according to UNHCR.