You are here: Home / MidEastGulf / Iran deploys Iraqi Shiite to back Syria’s Assad 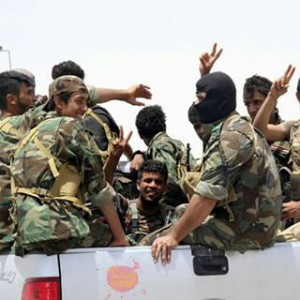 Iran has ordered thousands of Shiite militia fighters from Iraq, known as the Hashd al-Shabi or Popular Mobilization Units, to go to Syria for an alleged upcoming attack on the rebel-held city of Aleppo.

The Washington Post said Major General Qassim Sulaimani, the leader of Iran’s elite Quds forces, has bought the Iraqi Shiite groups to fight alongside the Iran-backed Hezbollah of Lebanon and other Shiite allies to recapture Aleppo,which has been largely under control of anti-Assad rebels 2012.

“We are all the followers of Khamenei and will go and fight to defend the holy sites and Shiites everywhere,” Bashar al-Saidi, a spokesman for the Iraq-based Harakat Hezbollah al-Nujaba, was quoted as saying in the Washington Post report in reference to Iran’s Supreme Leader Ayatollah Ali Khamenei.

Iran has played a major role in neighboring Iraq and Syria in the last few years and Sulaimani has advised and commanded Iraqi Shiite forces in the fight against the Islamic State, or ISIS. He has also been an active presence in Syria, Iran’s major ally in the region.

A senior official from Kataib Hezbollah, an Iranian-backed Shiite militia based in Iraq, told the Post that the group had sent 1,000 troops to Syria to fight for Sulaimani.