You are here: Home / MidEastGulf / Iran Declares: Even if Congress Defeats Deal, We Won 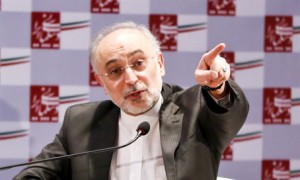 The US Congress is currently engaged in a 60-day review period of the Iran nuclear deal after which it will vote on whether or not to approve the agreement, but according to the Islamic regime it has “won,” no matter what Congress decides.

Ali Akbar Salehi, head of the Atomic Energy Organization of Iran (AEOI), told a gathering in Tehran on Sunday that Iran has won, even if Congress rejects the deal and blocks US President Barack Obama’s veto, reports the semi-official Fars News Agency.

“The fate of the Joint Comprehensive Plan of Action (JCOPA) is not fully clear yet since there is commotion in the US, and the Congress and the US administration have stood up to each other,” Salehi said of the Iran deal.

But he added that “no matter (if) the JCPOA is approved or disapproved by the US Congress and even if Obama fails to do anything, we will be the winning party.”

Explaining his declaration of victory, the nuclear chief was paraphrased by Fars as saying that even if Congress blocks the deal, the US “will face problems in maintaining its political credibility and improving its economic conditions.”

The supposed damage to America’s credibility and economy will be heightened because Iran “has not violated” its agreements, according to Salehi.

Ironically the deal isn’t just facing opposition in Congress – Iranian hard-liners have been holding rallies calling on their parliament to reject the deal as well.

That protest comes despite the fact that the deal lifts hundreds of billions of dollars in sanctions relief for the leading state sponsor of terror, lifts weapons and missile sanctions on Iran, allows it to keep its entire nuclear program and continue developing it with foreign aid, and have the program defended from nuclear sabotage courtesy of the West.

The deal likewise has Iran inspect its own covert nuclear sites where nuclear detonator testing has occurred, and gives Iran 24-days notice before any inspections occur.

Since the deal has been reached, Iran has announced construction on two new nuclear sites, and shown an increasingly aggressive military stance particularly vis-a-vis its ballistic missile program.