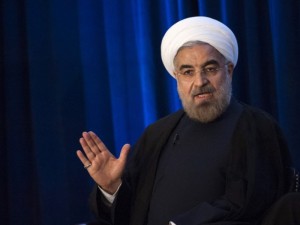 Iran’s president said Sunday his country’s nuclear deal with the West would create better prospects for faster solutions in Syria and Yemen, two of the Middle East’s worst conflict zones.

In a live appearance on state television, Hassan Rouhani said the July 14 agreement had shown diplomacy and engagement were the only way to solve serious political problems and end crises.

The near two years of talks between Iran and six world powers — Britain, China, France, Russia, the United States and Germany — was a “Herculean task” but was worth it, Rouhani argued.

“I was never despondent,” he said of the talks which seemed to be faltering at numerous stages, with negotiators at loggerheads over the terms of the deal.

“Not for a single second did I doubt our success,” he said, noting that “interaction” had triumphed over possible confrontation and surrender, neither of which “held much water” as options.

Under the agreement, Iran will curb some but not all aspects of its nuclear programme in exchange for a lifting of international sanctions that have pulverised its economy in recent years.

Tehran backs Syrian President Bashar al-Assad and has sent money and military advisers to aid his fight against Sunni rebels seeking to topple his regime.

And in Yemen, a Saudi-led air campaign against Iran-backed Shiite Huthi rebels has been heavily opposed in Tehran, leading to a near collapse of its ties with Riyadh.

The kingdom accuses Iran of meddling in Arab states, including Yemen which is majority Sunni, and Bahrain, a Sunni monarchy with a Shiite majority.

US Secretary of State John Kerry, the chief American negotiator in the Iran nuclear talks, sought to assure Middle East allies Sunday that the deal would make them safer, as he began a regional tour in Egypt and later flew to Qatar.