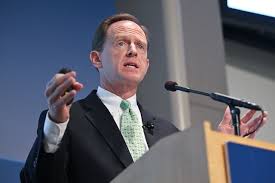 “The deal jeopardizes American security in a fundamental way. Like all of the radical Islamic terror movements, if Iran is able to inflict harm on Americans, it will do so,” Toomey said in the weekly Republican address. “And this deal would give Iran the capacity to inflict harm in much more destructive ways than it is currently able to do. This deal will make military conflict more likely, not less.”

Toomey added that by accepting the deal, Congress would be backing “giving hundreds of billions of dollars to the world’s largest and worst state sponsor of terrorism, and ultimately paving the way for this outlaw regime to obtain nuclear weapons.”

The Pennsylvania senator, like virtually all of his Republican colleagues, is expected to vote against the Iran deal once Congress returns to Washington next week after the August recess.

Lawmakers have until Sept. 17 to pass legislation on the Iran nuclear deal, and until early October to try to override a potential veto from President Obama.

So far, three Senate Democrats — Sens. Ben Cardin (Md.), Charles Schumer (N.Y.) and Robert Menendez (N.J.) — have said they’ll vote against the deal, so Republicans need at least three additional Senate Democrats to reach a filibuster-proof 60 votes for a resolution of disapproval. Even if such a resolution passes, Obama would be able to veto it, and Republicans do not have the support to override a veto.

Like Cardin, Toomey pointed to an up-to-24-day delay on inspections on undeclared nuclear sites as an example that the deal is “full of holes.”

“It is nothing like the ‘anywhere, anytime’ inspections we were told were being negotiated, ” he added.

Republicans have also criticized the Obama administration for not including non-nuclear issues in the agreement, including Iran’s support for terrorism or the release of three Americans currently being held in the country.

Toomey on Saturday doubled down on that criticism, saying there are “other serious problems with the deal that go beyond Iran’s nuclear program.”

The Obama administration, as well as key Democrats, have argued that those issues, while important, are separate from the negotiation on Iran’s nuclear program.

Toomey is one of a handful of Senate Republicans who face potentially difficult reelection battles next year. His opposition to the deal sets him apart from potential challenger former Rep. Joe Sestak, who is running for the Democratic nomination.

Katie McGinty, who is running against Sestak in the Democratic primary and previously served as the chief of staff to Pennsylvania Gov. Tom Wolf, has yet to announce her position on the Iran deal.

According to a Quinnipiac University poll released late last month, 61 percent of Pennsylvania voters oppose the nuclear deal with Iran, with 26 percent in support.