You are here: Home / MidEastGulf / Iran confirms its support for Barzani to protect the security and stability of Kurdistan Region 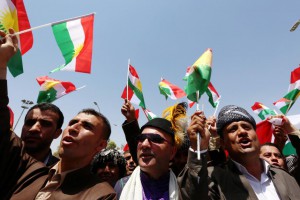 Presidency of Kurdistan Regional Government (KRG) announced on Wednesday, that Iran has renewed according to the Assistant Secretary General of the Iranian National Security Council , Ahmed al-Amiri its support for protecting the security and stability of the region and cooperation with Erbil in the war against “ISIS” terrorist organization.

A statement of the presidency of the region received by Shafaq News, the Prime Minister , Nechirvan Barzani received, Assistant Secretary General of the Iranian National Security Council, Ahmed al-Amiri and his accompanying delegation.

The statement said that Amiri expressed during the meeting, his happiness for visiting Kurdistan Region and the level of bilateral relations between Iran and the region in all fields, especially in the commercial and media field.

The statement added that Amiri addressed in the context of his speech , the situation in Iraq and the war against “ISIS” terrorists, renewing his country’s support to Kurdistan Region in this war.

The statement noted that Barzani for his part expressed his happiness for the visit of the guests, renewed emphasis on the interest of Kurdistan Region on bilateral relations with Iran in all fields.

Barzani expressed according to the statement, his thanks to Iran, which has supported Peshmerga forces since the beginning of ISIS attack on the region.