You are here: Home / MidEastGulf / Iran, China setting up joint base in the Persian Gulf and the Arab Sea for collecting intelligence 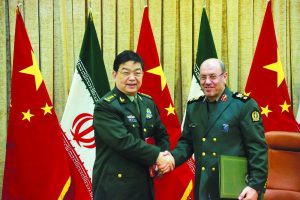 Under the strategic agreement that was signed recently between China and Iran, the countries agreed to establish joint intelligence collection capabilities in the area of the Persian Gulf and the Arabian Sea (with ranges of up 5,000km from the Iranian coast), like reported by israeldefense.co.il. The project for building the joint collection center is expected to begin in the second week of November this year.

The intelligence collection base will be at the port of Chabahar, where a joint control room for the collection, analysis and sharing of intelligence will be established. The collection of intelligence, which will be carried out by means of Chinese and Russian systems that will be supplied by Russia, will enable maritime and aerial monitoring using SIGINT, COMINT and ELINT collection systems.

The Chinese and the Russians will also install at the Iranian port electronic warfare systems for disrupting the transmissions of missiles, aircraft and even air defense systems. A Chinese-Iranian-Russian joint center for carrying out cyberattacks will even be set up in the area of the port.

The strategic concept being implemented via the intelligence systems by the Chinese in Iran is Anti-Access/Area-Denial (A2/AD), based on a Russian concept, which has been implemented for many years by China in the South China Sea and by the Iranians in the Persian Gulf. The object of this strategic concept is to create airspace and waters in which the rival cannot maneuver and operate his weapons, using layers of detection, defense and attack systems.

The building of the new Chinese-Russian-Iranian capability will enable the three partners to surveil and monitor the air and sea areas all the way to Austria in the west, including the airspace of Israel, Turkey and Greece; from the south to Egypt, Sudan, Ethiopia, Somalia and Kenya; and from the east, to Afghanistan, India, and Pakistan all the way to Thailand.