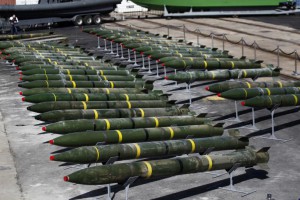 Israeli officials reported that Iran has upped its delivery of weapons to the Lebanese Shiite terror group Hezbollah in the past few weeks. Channel 2 stated that the shipments have been made to both Lebanon and the Syrian side of the Golan Heights.

In addition, the report stated that Iran was sending weapons to Hamas chiefs in Gaza and arming Hamas members in Judea and Samaria.

Channel 2 asserted that the ease in sanctions on Iran from the present nuclear negotiations would allow it to spend “billions of dollars” shipping weapons to Israel’s enemies.

The increase in Iranian arms shipments coincides with Monday’s announcement that Russia will reverse an earlier ban and send S-300 missile defense systems to Iran. Israel is concerned Iran will transfer the systems to Lebanon and Syria, allowing Hezbollah to attack Israel with impunity and imperiling Israel’s ability to strike back.

Lebanese media reported in September 2013 that Hezbollah wanted to use Syria as a base for attacks against Israel. In January 2014, General Amir Ali Hajizadeh, the head of Iran’s Revolutionary Guard’s aerospace division, boasted that Hezbollah could pinpoint targets anywhere in Israel.