You are here: Home / MidEastGulf / Iran blasts new US sanctions linked to its missile program 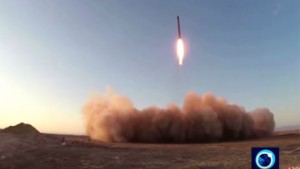 Iran on Monday denounced as “illegitimate” new sanctions by the United States on its ballistic missile program, days after Tehran’s landmark nuclear deal with world powers came into effect.

He added that Tehran saw fresh economic sanctions as “illegitimate.”

“As previously announced, the Islamic Republic of Iran… responds with determination to such propaganda by accelerating its legal ballistic missile program and boosting defense capabilities,” Ansari said.

The Treasury Department said Sunday that it was imposing the penalties against 11 firms and individuals based in the United Arab Emirates that had helped provide secret materials to Iran to develop their ballistic missile program, against a United Nations Security Council resolution.

“Iran’s ballistic missile program poses a significant threat to regional and global security, and it will continue to be subject to international sanctions,” said Treasury Undersecretary Adam J. Szubin, according to a statement from the department. “We have consistently made clear that the United States will vigorously press sanctions against Iranian activities outside of the Joint Comprehensive Plan of Action — including those related to Iran’s support for terrorism, regional destabilization, human rights abuses, and ballistic missile program.”

The Treasury said it was imposing penalties against a network of six companies based in the UAE and China, as well as five Iranian individuals.

The network “obfuscated the end user of sensitive goods for missile proliferation by using front companies in third countries to deceive foreign suppliers,” according to a Treasury statement.

The moves came as the US, Iran and five other nations marked the end of years of negotiations with the implementation of the nuclear deal, which, proponents say, will keep Iran from obtaining a nuclear weapon, in exchange for sanctions relief.

In remarks shortly before the US announcement, Iran’s President Hassan Rouhani said that any new American sanctions would be “met by an appropriate response.”

Under the deal, though, the UN arms embargo on the country continues, as do ballistic missile restrictions.

However, Iran has test-launched ballistic missiles on at least one occasion since the nuclear deal was reached last July. Israel and other nations called on the US to take action against Iran after the tests, which broke a 2010 UN Security Council resolution, but the US hadn’t followed through on pledges to impose penalties. Washington also offered no response to an Iranian navy rocket fired near a US warship in the Strait of Hormuz.

The implementation of the nuclear deal is expected to pave the way for a new economic reality in Iran, now freed from harsh international sanctions.

More than $30 billion in assets overseas will become immediately available to the Islamic Republic. Iran’s Central Bank Governor, Valiollah Seif, was quoted by the official IRNA news agency as saying that Iran will not transfer the cash and instead will use it to import the goods it needs. Official Iranian reports have set the total amount of frozen Iranian assets overseas at $100 billion.

A European oil embargo on Iran will end. Already, some 38 million barrels of oil are in Iran’s floating reserves, ready to enter the market, according to the International Energy Agency.