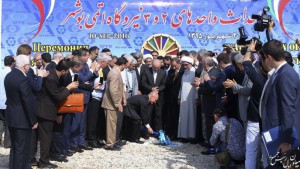 Russia is helping Iran with the construction of the facility near the southern port city of Bushehr, the site of Iran’s other operational nuclear plant.

Construction of the site is expected to take about 10 years and cost up to $10 billion.

U.S. President Barack Obama has called the pact a success, saying, “All of Iran’s pathways to a nuclear weapon remain closed.” He said the deal, implemented in January, has pushed the time-frame for Iran to develop a nuclear weapon if it violated the agreement from two or three months to “about a year.”

U.S. opponents of the deal have not changed their view that the agreement would not force Iran to end its military activities in the Middle East or ultimately block it from developing a nuclear weapon.

Iran has removed thousands of centrifuges that had been used to enrich uranium and shipped out the majority of its existing stockpile. World powers lifted their sanctions, unlocking billions of dollars for Iran and clearing the way for new business opportunities there.

Iran has complained that despite the lifting of sanctions that once barred financial institutions from doing business with the country, foreign banks remain reluctant to be involved in transactions.

The agreement spells out a 10-year limit on Iran’s centrifuges, a 15-year limit on how much it can enrich uranium and a 25-year period for U.N. inspectors to have access to Tehran’s nuclear facilities, all pushing the deal’s major effects beyond certain changes in leadership among the nations involved in the negotiations.

The United States and nuclear experts point to the main result, extending the timeline under which Iran could rush to build a nuclear bomb.