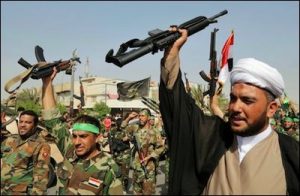 Iran-backed Shia paramilitary forces operating in northern Iraq have been accused by a Kurdish parliamentarian of engaging in “flagrant injustice” toward Christians in the region which until earlier this year was in the grip of ISIS terrorists.

Wahida Yaqo Hormuz — a Christian representative in the parliament of the Kurdistan Regional Government (KRG) — said she had alerted the Vatican and international human rights groups to what she called the “Shia-ification” of the Nineveh Plains, where the northern Iraqi city of Mosul is located. Conquered by ISIS in 2014, Iraqi government forces retook the city in July.

“This is a flagrant injustice done to Christians,” Yaqo Hormuz said, commenting on reports that the Hashd al-Shaabi paramilitary, a coalition of armed Shia groups supported by Iran, was preventing the return of Christians who fled during the recent assault on KRG-controlled territories in northern Iraq.