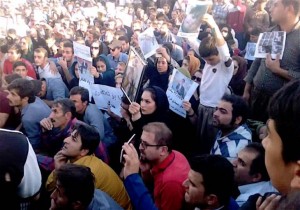 Iranian security forces broke into dozens of houses in the Kurdish-majority northwest, and arrested at least 20 activists.

The campaign targeted the Kurdish cities of Mahabad, Sardasht and Piranshahr in northwestern Iran.

“The Iranian authorities claimed that the arrestees are suspected of having ties with terrorist organisations,” Zeredashti said. “Under such a pretext the Islamic Republic of Iran has been arresting, torturing and executing peaceful Kurdish activists for years.”

In October, the Iranian security detained over 30 Kurdish activists for organising an anti-government protest in the cities of Mariwan and Mahabad, where hundreds of Kurds took to street to condemn “suppression by the Iranian authorities.” The protests then spread to other cities, including Sanandaj, the capital of Kordestan Province.

“Kurdish citizens in Mahabad, Mariwan and Sanandaj raised anti-regime banners, condemning the oppressive practices by the government of the Islamic Republic of Iran and calling for the release of all political prisoners,” local sources told ARA News at the time.

Halmand Mihemendi, a Kurdish political activist and former prisoner in Iran, told ARA News that most of the arrestees are being tortured regardless of the charge.

“A majority of those detained by the authorities are being executed. This has been taking place in Iran on a daily basis,” Mihemendi said.