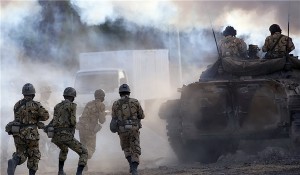 The drills which are being staged in the Western and Northwestern provinces of Iran are aimed at enhancing the country’s defensive power, practicing modern trainings and assessing the forces’ swift reaction and use of state-of-the-art equipment.

During the exercises, the Iranian army forces for the first time tested the home-made command-and-control system, ‘Fakour’ (Thoughtful), on Monday morning.

The tactical command-and-control system can collect information from all databases and information gathering centers linked to the air defense system, passive and active radars, missile systems and other close command-and-control centers to provide an integrated image and map of the region to command and control all land-based and air-based defense systems fully independently.

The system which was unveiled in May is mobile and can be deployed in any region and under harsh geographical conditions and has a wide range of applications in electronic warfare. Utilizing an exclusive microwave network and the national fiber-optic and wired and wireless communication network as well as real-time assurance of target interception and destruction are among other capabilities of the smart system.

In the main phase of Muharram exercises, the quick reaction forces of the army carried out operations using snipers and different equipment, including RPG 29.

Yet, Iranian officials and commanders have repeatedly underlined that all military exercises and trainings of the Iranian Armed Forces are merely meant to serve deterrent purposes.

Brigadier General Massoud Rouzkhosh, spokesman of the Fadaeeyan-e Harim-e Velayat-5, said that Sokhoi 24 with long-range operations capabilities, F4, F5, F7, Mig 29 and F14 aircraft as well as Boeings 707 and 747 and different types of drones and C130 transport planes took part in the exercises.

On September 22, the Iranian Armed Forces displayed the country’s latest home-made long-range and ballistic missiles during the annual military parades in Tehran and across the country on Tuesday.