You are here: Home / MidEastGulf / Iran announces full guardianship on Syria during days and send 100 000 fighter 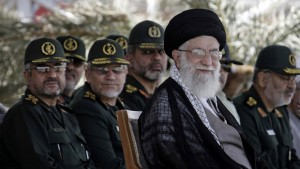 “Wall Street Journal” attributed to Western sources that Iran is preparing to announce the full guardianship on Syria, imposing protection on Damascus and President, Bashar al-Assad.

According to the sources, Iran prepared military units estimated at 100 thousand troops, trained by the elite forces of the Revolutionary Guards, and will transfer those forces flown to Damascus directly to protect them from falling with full weapons and their equipment, as Tehran equipped an air bridge to transport these soldiers.

According to the Wall Street Journal, the Syrian army approved a new military doctrine based on the abandonment of distant and remote towns, where there are a small number of the population and withdraw from the concentration in large cities such as Latakia, Damascus, and leave the other towns and villages for insurgent to take control of them.

The newspaper quoted a Western diplomat visiting Damascus constantly within international mediation efforts to resolve the Syrian crisis, his confirmation that Syrian officials have confirmed not the army’s inability to secure all the country’s borders and presence in all regions due to the weakness of its abilities and reduced numbers, and would accept to work in important strategic areas and densely populated places .

The newspaper quoted Ali al-Haidari , minister of national reconciliation in Syria, as saying that the army withdrew from Palmyra city to secure more important strategic areas, and that the situation is now governed by the economic importance and population density for the deployment of the army, while the areas where these conditions are not available will be left for militants to take control of them

The newspaper quoted sources inside Syria that every young person pays about $ 2000 for army officers to help out of the country and escape to Lebanon to not to engage in the army, and became the smuggling of soldiers, youth and the sale of arms source of income is important for officers of the Syrian army seeking to secure funds for themselves also to escape from Syria