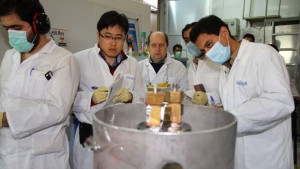 Lawmaker Ahmad Shoohani, a member of parliament’s National Security and Foreign Policy Committee who attended the closed-door session, said restricted inspections of military sites will be carried out under strict control and specific circumstances.

“Managed access will be in a shape where U.N. inspectors will have the possibility of taking environmental samples from the vicinity of military sites,” Shoohani said.

Iran and six world powers — the U.S., Russia, China, Britain, France and Germany — hope to work out terms of a final nuclear deal before a June 30 deadline. Inspection of military sites suspected to be taking part in the nuclear program is a top priority of the U.S.

The West fears Iran’s program could allow it to build a nuclear weapon. Iran says its program is for peaceful purposes.

The broadcast also quoted Araghchi as saying Iranian negotiators rejected demands that its scientists be interviewed.

“Americans are after interviewing our nuclear scientists. We didn’t accept it,” state TV quoted him as saying.

Iran’s nuclear scientists have been the targets of attacks before both inside the Islamic Republic and elsewhere. The country also views the interviews as tantamount to a criminal interrogation.