You are here: Home / Europe / Iran admits collaborating with Al-Qaeda in Bosnia 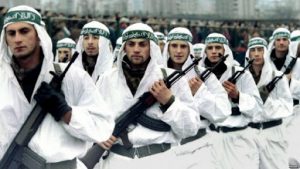 The clerical regime in Iran established a relationship with Al-Qaeda shortly after its foundation thirty years ago. One of Tehran’s and Al-Qaeda’s first joint projects was in Bosnia during the war (1992-5), where Iran helped to make Al-Qaeda a truly global phenomenon—with a foothold in Europe. For various reasons—some well-intended, some not—this fact has been either unknown or (shall we say) “controversial” in the West in the decades since. It is, therefore, important to note that there have been several recent revelations from in and around the Iranian regime itself that confirm the Islamic Republic’s involvement in the Balkans in the early 1990s, like reported by kyleorton1991.wordpress.com.

As former Jugoslavija came apart, the Serbian regime headed by Slobodan Milosevic inherited the Jugoslav Federal Army (JNA) and, having failed to hold together the Union, Milosevic moved to create “Greater Serbia”, an expansive, “pure” ethno-religious enclave. For reasons of geography, among other things, Bosnia became the central front in this campaign of expulsion and massacre, beginning at Zvornik. An arms embargo was imposed, with the ostensible purpose of reducing the scale of the violence; its practical effect was to lock in the imbalance between the Bosnian government and the Milosevic-controlled JNA.

Bosnia’s leader, Alija Izetbegovic, and his ruling party, the Party of Democratic Action (SDA), descended from the Young Muslims, an insular and conspiratorial Muslim Brotherhood-style clique which had been heavily repressed by the Communist regime of Marshal Tito and Jugoslavija’s infamous secret police, the UDBA (an intelligence service that by no means confined its dirty tricks to the borders of former Jugoslavija). Emerging again in the early 1980s after being underground since the immediate aftermath of World War Two, most Bosnians had little idea what the Young Muslims was.

An indication of what was truly behind the SDA’s liberal messaging was given in September 1990, when Izetbegovic held a massive rally, where there were chants of, “Long Live Saddam Husayn” (this is in the midst of the crisis after Saddam has occupied Kuwait) and posters of Ayatollah Ruhollah Khomeini, an idol for Izetbegovic, who, like many Sunni Islamists, had been encouraged by the creation of the theocracy because it showed that such a thing was possible. One of Izetbegovic’s then-allies, arriving on the stage and looking out at this scene, asked in horror, “By God, Alija, why are you doing this? Don’t you know that in a half an hour, these pictures will be shown around the world?”

In the course of events, such things would not prove to damage Izetbegovic really at all. Iran was able to capture the security institutions of the Bosnian state through the Quds Force unit of its Islamic Revolutionary Guards Corps (IRGC)—led at the time by Muhammad Reza Naqdi (the late Qassem Sulaymani took over in 1997 or 1998)—and the Intelligence Ministry (known then as VEVAK). Not even after NATO finally intervened and took over Bosnia as a de facto Mandate was there a serious drive to disentangle Iran from the SDA government. An Iranian official remarked several years ago that the policy pursued in Iraq against the Islamic State (IS), where the U.S. provided airstrikes to IRGC-run militias, was “very similar to what happened in Bosnia,” where the Iranians were “fighting on the ground … while the airstrikes [were provided] by the United States”.

Iran enabled or carried out for the SDA multiple assassinations against its Muslim opponents, in besieged Sarajevo and further afield. Some of those targeted were honourable men, like the chief of the General Staff Sefer Halilovic, who narrowly escaped with his life; others were basically criminals, like Jusuf “Juka” Prazina, whom the SDA had deputized until it didn’t, cutting him down in Belgium in December 1993.
Iran was also responsible underwriting the Bosnian government’s war effort, specifically the ideological units—like the Seventh Muslim Brigade and the Mujahideen Battalion (El-Mudzahid)—that were subordinate to, though somewhat distinct from, the conventional Bosnian army (the Seventh Muslim Brigade was under the Third Corps, for instance, a professional outfit). These ideological units were intended to be the model for the army in Izetbegovic’s imagined future Islamic state, as most comprehensively explained in historian John Schindler’s Unholy Terror. Ayatollah Ahmad Jannati, who currently presides over the Guardian Council and the Assembly of Experts, two key institutions of the Iranian theocracy, was charged with overseeing Iran’s policy in Bosnia during the war and at one point visited the Seventh Muslim Brigade with Izetbegovic, a symbolic affirmation of the shared dream between clerical Iran and Izetbegovic’s inner-circle.

The exact number of foreign jihadists who came to Bosnia to fight for Izetbegovic’s regime is unclear; estimates cluster around 5,000, and they were joined in the ideological units by 3,000 local Bosnians. The foreign contingent was dominated by Egyptians and to a lesser degree Algerians—both states undergoing serious Islamist insurgencies at the time, with the Islamists faring badly and looking to external refuges. The Egyptians were mostly drawn from Tanzim al-Jihad (The Holy War Organization), later Egyptian Islamic Jihad (EIJ), which was led by Ayman al-Zawahiri, Al-Qaeda’s current emir. EIJ had close connections to Usama bin Laden even at this time and would merge formally with Al-Qaeda in the months before 9/11. Al-Zawahiri was personally in Bosnia for stretches of the war, as well as travelling to other militant hot-spots, and shortly after NATO moved into the country went on his strange sojourn in Russia.

Al-Zawahiri had been a strong admirer of the Iranian revolution and the Iranians returned the sentiment; he was “Iran’s favorite Sunni jihadist poster boy, an honored guest in Iran in the 1980s”, as former CIA officer Reuel Marc Gerecht put it. There was a natural affinity, then, when IRGC took on the job of organising, training, equipping, and commanding these Sunni jihadist cadres in Bosnia. Concentrated around Zenica and Travnik in central Bosnia, the Iranian-run camps produced the fighters that carried out the majority of the worst atrocities on the Muslim side. After the war, the SDA regime naturalized the foreign jihadists and the jihadists put down local roots. Unsurprisingly, most of the Bosnian passport-holders who joined Al-Qaeda or IS in Syria and Iraq in the last decade came from these areas.

As well as assisting the creation of the global jihadi-Salafist threat, the clerical regime in Iran is a menace on its own terms, of course. The networks Tehran created in the early 1990s and has sustained ever since were put to use in, for example, the suicide bombing against a bus full of Israeli civilians by IRGC’s Lebanese division, Hizballah, in Burgas, Bulgaria, in July 2012.

Over the past year or so, Iran has been opening up about this history.

The first important marker came from Saeed Ghasemi, a retired IRGC officer, who gave an interview on 14 April 2019 in which he admitted that IRGC had been in Bosnia in the 1990s, under the flag of the Iranian Red Crescent, to train the Sunni jihadists fighting on behalf of Sarajevo against the Serbian Orthodox militias run from Belgrade. Iran has regularly used the tactic of disguising IRGC operatives as aid workers, notably in the war Hizballah/IRGC fought against Israel in Lebanon in 2006.

Ghasemi specifically acknowledged that IRGC had worked with Al-Qaeda. “In Bosnia, in the heart of Europe, there were many developments”, said Ghasemi. “We were side by side with Al-Qaeda. The members of Al-Qaeda learned from us.” Al-Qaeda even “copied our style, from the headband and the flags”, says Ghasemi, adding: “From all over the world, mujahideen poured into Bosnia, and there was a new development. Muslim jihadi units were established.” Ghasemi blames CNN host Christiane Amanpour, who is of Iranian descent, for blowing the cover of IRGC in Bosnia. “[T]his dishonourable spy … gave us away”, he says. Ghasemi went on to say that Bosnia was a trial run for what happened later in Syria, with Iran bringing “disciples of the Imam [Khomeini]” from around the world.

IRGC rebuked Ghasemi for saying this in public.

The second straw in the wind came two weeks ago in the form of a report on Basirat, a “semi-official” website, which seemed to offer more formal confirmation that the Quds Force, the “warriors without borders”, had been involved in Bosnia—and Afghanistan, where the report admits IRGC began its involvement in the 1980s during the Soviet occupation and supported Ahmad Shah Masud, among others, plus Iraq, Lebanon, Gaza, and Syria, with just a passing reference to Yemen. The Basirat report seems to be a reprint of something from Fars News, another “semi-official” outlet known to be close to IRGC.

The IRGC-linked report refers to Bosnia as the Quds Force’s “first serious battlefield” and says the first “martyr” was Rasul Heydari (Majid Montazeri), a veteran of the Iran-Iraq War who was serving in Bosnia as a “diplomat” when he was killed—by the Croat Catholic forces, as it happens—in 1994. The report confirms Ayatollah Jannati’s role in overseeing the Iranian expedition in Bosnia and Naqdi’s role in leading it operationally on the ground. The report adds that Naqdi was joined by another field commander, Mostafa Rabiei, who was the head of the “inspection” division of IRGC. The report gives IRGC credit for expanding the territory under SDA control.
“The Quds Force created infrastructure that provided logistical support for the transfer and organising of volunteers from different nationalities [i.e. foreign fighters] for the battle in Bosnia,” the report goes on. “The infrastructure was also used to facilitate the transfer of Bosnian fighters to Iran for training”. This is hardly unprecedented: as the 9/11 Commission Report notes, after Iran and Al-Qaeda created their pact against the West in 1991 or 1992 in Sudan, the first act was to send Al-Qaeda forces for training with IRGC/Hizballah in the Bekaa Valley in Lebanon. Nonetheless, this is an important admission that demonstrates how direct was the Iranian involvement with the Sunni jihadists in Bosnia.

Useful as it is to have confirmation direct from source about IRGC’s behaviour in Bosnia and collaboration with Al-Qaeda, it is an open question how far this breaks through in the West. After thirty years, it still remains little-known what Tehran did in the Balkans as Jugoslavija collapsed and the entire question of Iran’s relationship with Al-Qaeda has become heavily politicized, particularly in the United States where it is an adjunct to the tussle over the nuclear deal and Sulaymani’s killing. An example of this was seen recently when U.S. Vice President Mike Pence noted that half or more of the 9/11 death pilots had been facilitated in their travels to Afghanistan by the clerical regime in Iran—a fact that has been public since 2004, documented in black-and-white in the 9/11 Report. This did not prevent the furious indignation of the liberal “fact-checkers” and even a polemical outburst from The Associated Press. There seems no chance that the political polarization that has coloured this debate will recede in this Election year.