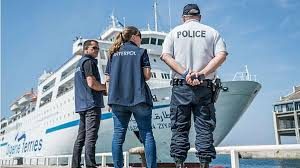 A maritime border operation coordinated by Interpol has detected more than a dozen suspected “foreign terrorist fighters” (FTFs) travelling across the Mediterranean, like reported by euronews.com.

Officials at seven seaports in Algeria, France, Italy, Morocco, Spain and Tunisia carried out more than 1.2 million searches across Interpol’s databases, looking for stolen and lost travel documents and stolen vehicles, among other things.

They resulted in 31 active investigative leads, with over 12 of them linked to the movement of terror suspects.

Experts from the European Border and Coast Guard Agency (Frontex) and the World Customs Organization (WCO) also participating in the initiative.

“Interpol acts as a global tripwire, by disrupting the movement of individuals linked to criminal and terrorist activities,” according to Secretary-General Jürgen Stock.

“Every check, border control or random search is a potential break in a terror investigation,” he added.

Interpol is the world’s largest international police organisation, coordinating action between forces around the world, including searches for wanted and missing people.

Its databases currently hold details of more than 50,000 foreign terrorist fighters and some 400,000 pieces of terrorist-related information, the organisation said.