You are here: Home / Senza categoria / International threats of the Brotherhood 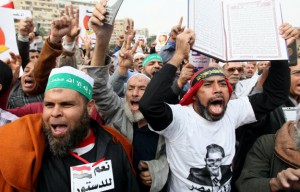 The year of Muslim Brotherhood rule in Egypt not only exposed the group’s racism and bigotry, together with its delusions of grandeur and megalomania, but it also revealed the ideological reach of the international organisation, with its branches in various world capitals.

The organisation was even more explicit in its contempt for the millions of Egyptian people who marched against its rule and who, it thought, were something less than human because they neither belonged to nor supported the organisation.

At all events, within a matter of months the Muslim Brotherhood was out of power in Egypt. The Egyptian people overwhelming moved to shake off its grip after rejecting its arrogance and the cunning with which it sought to undermine the foundations of the Egyptian state, starting with the eastern borders in Sinai.

This was where the Muslim Brotherhood supported terrorist organisations by facilitating their entry into Egypt and the creation of the kernel of an Islamic emirate that could be called in to serve the Brotherhood regime whenever it encountered problems.

During the same period, tens of thousands of Palestinians obtained Egyptian nationality. This was portrayed as an act of magnanimity, whereas in fact it presented a gift to Israel as these Palestinians had lost their land due to their insistence on internationalising and carrying out their struggle outside their borders.

While the Israelis clung to their land, the Palestinians sped around the globe, holding conferences in foreign capitals in the belief that taking the struggle abroad would give them back their land at home.

Eventually, then-Palestinian leader Yasser Arafat realised that this was a mistake, leading him to sign the Oslo Accords so that he could return to the Occupied Territories and begin where he should have begun 40 years earlier — building the Palestinian state on the ground.

But the fashion for transporting a domestic struggle to foreign capitals is one that is hard to give up. The Syrians took the same route from the outset of the Syrian Revolution, with the result that the situation in the country has mushroomed into a disaster of catastrophic proportions. There is now a huge Syrian diaspora — but this time it is a diaspora the people created themselves.

Another prime example is the International Muslim Brotherhood, which has demonstrated how adept it is at sidling up to international decision-making bodies while simultaneously fixing in Western minds an image of Islam that reduces the faith to the version of it held by Brotherhood founder Hassan Al-Banna.

The Brotherhood has created the impression in the Western imagination that a Muslim is either a bearded fanatic or a terrorist. With its particular creed and high-profile activities, the Brotherhood has succeeded in obscuring the moderate alternative Islamic discourse, which is why the governments in countries that have turned to the group for its perceptions on Islam see problems arise whenever Islam is mentioned.

One of the consequences of this is that moderate Islamic discourse, as epitomised by Al-Azhar, has fallen into decline. The Muslim Brotherhood’s strategies for penetrating societies abroad, exploiting Islam to advance its ends and casting Islam in its own image merit close attention as a result.

Political Islam has become a chief focus of think tanks and decision-making circles abroad. A major reason for this has been the proliferation of jihadist groups inculcated with and inspired by ideas espoused by Brotherhood ideologues.

There is also the problem of the recruits to the Islamic State (IS) group from Western countries, most of them coming from the Arab or Muslim communities in those societies. This alarming phenomenon underscores the need to study the religious ideas that Islamists in the West use to indoctrinate young people and turn them into extremists.

Another reason for concern is that transnational religious organisations such as the International Muslim Brotherhood have taken advantage of the freedoms they enjoy in Western societies to distort the image of their native lands. Egypt is a favourite target. They will go to any lengths to blacken the country’s name, even if this leads to economic blockade from abroad and terrorist destruction from within.

In this region, the state is also retreating in many Arab societies and being replaced by affiliations to warring religious factions, whether these go by the name of IS, Ansar Beit Al-Maqdis or the Muslim Brotherhood.

All these groups have the institutionalised state in their crosshairs, and they are fighting it at home and undermining it abroad because it conflicts with the fanatical creed of their religio-fascist organisations, which are driven by a vision of imposing their totalitarian hegemony in defiance of the universal laws of human diversity.

Islamism and the Islamist organisations are correctly regarded as formidable obstacles to the Arab and Muslim people’s drive to assume their proper place alongside the other peoples of the world. If political despotism strangles societies, religious despotism strangles minds and produces terrorist groups.

In fact, it appears that there is a direct correlation between the two: wherever you find political dictatorship you find religious dictatorship and vice versa. The Egyptian Revolution, which came in two waves, opened the door to freedom by first overthrowing the Mubarak dictatorship and then putting an end to an emergent theocratic dictatorship that had gained access to power through the ballot box.

These two waves of revolution were real gains for Egyptian society. The near future will compel the threat of tyranny to recede further, as the rule of law, institutional government and the voice of the electorate gain in strength.

These are the ingredients that form the most effective immune system against threats from abroad, especially those from the transnational religious organisations that in various guises continue to carry out destructive activities in many Arab countries.