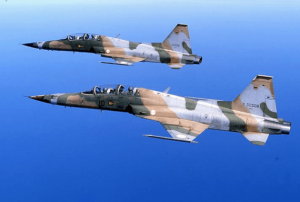 An international air defence exercise is taking place in Tunis, in which the Algerian, French, Portuguese, Spanish and Tunisian airforces are taking part.

The event is part of the “5+5 Dialogue” or Western Mediterranean Forum, which was set up in 2004 to foster cooperation in joint matters such as security and defence such as marine surveillance, training, civil protection, search and rescue and the surveillance and defence of the airspace.

A Tunisian military transport plane will be used to simulate a “renegade” civil plane, technical jargon for civil planes arriving or leaving national airspace that could constitute a security risk because of being traced to possible terrorist action.

The command, control and radar surveillance centres of the countries along the aircraft route, pilots and ground staff at the air bases will be expected to react swiftly and in a coordinated manner in order to intercept and escort the threat out of national airspace or force the plane to land at a designated airport, according to instructions from the ground following established protocols – which is what would happen in reality.

The aim of the exercise, which takes place on an annual basis, is to foster and consolidate the adoption of common procedures for managing events of this sort, where each nation has its own duty, but where taking coordinated action is essential, given the speed and complexity of potential intervention. The 2014 edition was led by Italy.

The leg of the exercise in the Italian airspace will be managed by the air operations command centre at Poggio Renatico, the air force command and control centre that carries out 24-hour surveillance of the national airspace, and which gives immediate orders for fighter interceptor planes to take off.

Several officers from the centre will be in Tunis, inside the cell selected by those managing the exercise.