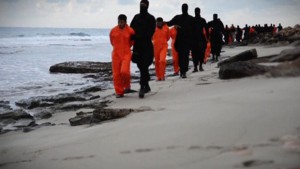 The International Criminal Court can investigate alleged crimes by Islamic State militants in Libya, but it is first up to individual states to prosecute their citizens accused of offences, The Hague-based court’s prosecutor said on Tuesday.

The United Nations Security Council asked the court in 2011 to investigate crimes committed since the start of an uprising the same year that led to the fall of leader Muammar Gaddafi.

Libya has since descended into chaos, with two competing governments backed by militia brigades scrambling for control of the oil-producing country and creating havens for Islamist militants and traffickers.

ICC prosecutor Fatou Bensouda told the UN Security Council on Tuesday that she had noted the 15-member body’s calls for accountability for alleged crimes against civilians committed by groups claiming allegiance to Islamic State.
Advertisement

“My office considers that ICC jurisdiction over Libya prima facie extends to such alleged crimes,” Ms Bensouda said. “I recall however the principle that states, in the first instance, bear the primary responsibility to investigate and prosecute their nationals who have joined forces with (Islamic State) and are alleged to be committing … crimes.”

Militants loyal to Islamic State have claimed several high-profile attacks on foreigners in Libya this year, including the beheading of 21 Egyptian Christians in February. That attack prompted air strikes by Egypt on Islamic State targets in Libya.

Last month, a video purportedly made by Islamic State appeared to show the beheading of some 30 Ethiopians in Libya.

Ultra-radical Islamic State controls swathes of territory in Syria and Iraq and last year declared a caliphate. France said in March it would push the Security Council to refer Islamic State to the international courts.

Ms Bensouda said she was also concerned about alleged indiscriminate attacks by parties to the Libyan conflict.

“My office is actively considering the investigation and prosecution of further cases, and will not hesitate to take such action as may be needed to contribute ending impunity in Libya,” she said.

The ICC wants to try Gaddafi’s son Saif al-Islam for war crimes, but Libya has failed to hand him over. Since his arrest in 2011, he has been held by a faction of former rebels in the Zintan region who often operate beyond the authority of the internationally recognised Libyan government.

Libyan UN Ambassador Ibrahim Dabbashi told the council that Libya still wants to try Gaddafi itself and hopes the ICC would acknowledge that.