You are here: Home / Africa / International conference on terrorism with UN, European Union and Arab League next July in Algiers 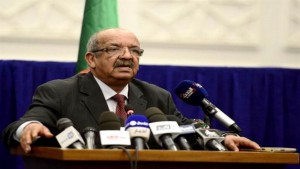 Algeria will host in July an international conference on terrorism, announced in Algiers Minister for Maghreb and African Affairs Abdelkader Messahel.

Messahel stated that counterterrorism coordination existed between Algeria, Egypt and Tunisia as part of the countries neighboring of Libya, mentioning the efforts of the UN, the US, the African Union (AU), the European Union (EU) and the Arab League.

“We will hold a conference on terrorism to define its causes and authors,” Messahel told a news conference held jointly with UN Special Envoy for Libya, Bernardino Leon at the end of 2nd round of inter-Libyan dialogue.

The fight against terrorism is one of “the major challenges faced by the region’s countries,” said Messahel indicating that the fight against this phenomenon concerns the entire international community, particularly the UN and the Security Council, whether in Libya Sahel or in another part of the world.”

Algeria “was the first country targeted by terrorism coming from Libya,” he said, recalling the terrorist attack that targeted the Tiguentourine gas complex (In Amenas) in January 2012.