You are here: Home / Analysis / Inside the sick minds of the women who joined Islamic State 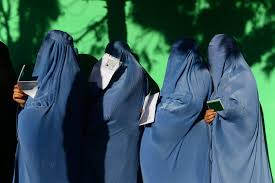 Azadeh Moaveni has written a powerful, indispensable book on a challenging subject: the inner lives and motivations of women who joined or supported the Islamic State militant group. It is a great read, digestible and almost novelistic, but it is much more than that., like reported by nytimes.com.

“Guest House for Young Widows: Among the Women of ISIS” tackles many taboos that have hampered cleareyed discussion of Islamist extremism in general and ISIS in particular. The book provides an illuminating, much-needed corrective to stock narratives, not only about the group that deliberately and deftly terrified officials and publics across the world, but also about the larger “war on terror” and the often ineffective, even counterproductive policies of Western and Middle Eastern governments.

Moaveni follows 13 women and girls — Tunisian, British, Syrian and German — creating three-dimensional portraits of their worlds, their logic, the choices available and unavailable to them. She made me hang on every turn to find out what would happen to them. This approach will likely infuriate some audiences, especially after years of media coverage that portrayed such women as uniquely evil, bloodthirsty extremists, or as brainwashed fetishists hot for jihadi men.

Moaveni anticipates such objections, acknowledging “the extraordinary horror and centrality” of the suffering of women victimized by Islamic State, like the Yazidis whose enslavement and rape have received enormous, sometimes prurient, coverage. “But along the way,” she writes, “we have been perhaps too caught up in revulsion to fully appreciate the conditions that gave rise to the group’s female adherents.” To truly understand these conditions, Moaveni argues, we must look at these women “with more nuance and compassion.”

Her call is urgent now, as hundreds of female ISIS members, or former members, and their children languish in camps and detention centers across the Middle East, subject to summary trials, the stripping of citizenship and indefinite incarceration in dangerously filthy conditions. Governments, including the United States and the United Kingdom, are dumping the problem of their own citizens who joined ISIS on ill-equipped authorities in Iraq and Syria.

Moaveni’s central observation, a theme that surfaces again and again in her detailed accounts, is that the decisions of female ISIS recruits — some of them young girls — made sense to them on their own terms. But almost no one bothered to address them on those terms when it mattered. The book highlights the failures of families, communities and governments to listen to the real and legitimate concerns of the women and girls, concerns that ISIS exploited, and address them in ways that could have made better sense to them than the call of the caliphate.

As Moaveni writes, one challenge was, and is, that such discussions can come perilously close to sounding like sympathizing with ISIS. From the United States and Europe to the Arab states, counterterrorism dragnets too often equate any degree of Islam-infused politics with support for Islamic State or Al Qaeda. Worse, in this atmosphere, any political discussion among young Muslims about the geopolitical or social issues most pressing to them increasingly risks being labeled “jihadist.”

Moaveni pulls no punches about what has helped to get us here. As ISIS carved out its so-called caliphate amid larger, politically driven conflicts in Syria and Iraq, she writes, it used “highly manipulative and effective” tools to draw recruits, subjugate populations and eliminate “the gray zone” of coexistence for Muslims in the West. But by playing on the world’s fears of Islam, they provided “cheap kindling for reporting that took the militants’ religious claims at face value.”

Thus, Moaveni writes, “ISIS became, in the Western imagination, a satanic force unlike anything civilization had encountered since it began recording histories of combat with the Trojan Wars.” It was seen as somehow uniquely incomprehensible, requiring a whole new class of “demonologists,” as Moaveni slyly labels them, to inspect just how rooted ISIS was, or wasn’t, in mainstream Islam. Less attention was given to the group’s origins in “American policies and wars,” or to the lived experiences of Muslims in the West and elsewhere, or to the “cold calculation” of many in the West that Syria’s violently repressive president, Bashar al-Assad, was preferable to any likely religious alternative.

As Moaveni shows, Islamic texts may provide clues about some ISIS leaders and theologians, but they were rather beside the point for thousands of foot soldiers, administrators and go-along-to-get-along caliphate residents who mostly lacked religious expertise and were driven by a varied mix of politics, faith, economics and self-preservation.

The particular individuals Moaveni concentrates on have page-turning life stories that make the book’s analysis go down easy. Their starting points are diverse: Nour, a Tunisian teenager, was stifled by an authoritarian secular government, inspired by the peaceful revolution that toppled it and disillusioned when the revolt’s promise faded. Emma, a lonely young German, converted because she loved the warm Muslim community of her German-Turkish friends. Lina, a Lebanese-German, left her abusive husband and found solace in increased observance, only to be rejected by her secular Lebanese father. Asma, Aws and Dua were not-particularly-religious residents of Raqqa, Syria, forced to game out survival when ISIS took over their city.

And then there are the three Bethnal Green girls, from a well-regarded London high school. They were friends of Shamima Begum, and all four absconded to ISIS when they were in their teens. Begum, whose parents are from Bangladesh, recently resurfaced in a camp and was stripped of her British citizenship after being judged insufficiently apologetic. She had given birth to three children, one in the camp. All of them had died.

As Moaveni acknowledges, some of her sources may have had incentives to play down involvement and emphasize dissent. However, her portrayals dovetail with what my colleagues and I learned in years of reporting, and she goes deep into her sources’ experiences to provide convincing answers to crucial puzzles. For one, why was Tunisia, the relative success story of the Arab revolts, a top supplier of recruits? (She points to failed reforms and the dashed hopes of newly galvanized observant youth.) For another: Why were some academically successful second-generation Britons drawn to the group, and how could their parents not have known, or stopped them?

Here, Moaveni is particularly poignant and incisive. If these poor, sometimes non-English-speaking immigrant parents had time to notice daughters spending more time at mosques, they saw that as a sign of good values and safety. She brings to life the children’s chafing between their freewheeling London environment, pressure to succeed and conservative family strictures.

And she homes in on a prickly subject. The pain and anger over the West’s treatment of Muslims, while exploited by ISIS, are entirely mainstream in Muslim households, including the vast majority that deplore any violence against civilians. But children alienated from their parents, like converts with no family context, were vulnerable to extremists.

Even more disturbing, Moaveni reports that the Bethnal Green parents were not informed directly by the school, or the police, that one of their daughters’ friends had run off to join ISIS. The British police, she writes, knew one girl was in Turkey on her way to ISIS but failed to have Turkish authorities stop her. Did they treat young teenagers as counterterrorism pawns, Moaveni and the girls’ families wonder, rather than victims needing urgent rescue? For me, these questions raised another: Would they have treated white British girls the same way?

Finally, for all its compelling material, one of the book’s lasting accomplishments is its form. It is a master class in illustrating the big picture through small stories. And it uses women’s experiences — still so often framed as a subplot — to reach the heart of ISIS. Centering a narrative on women leads, here, to a superior analysis of the overall subject, and this is a lesson with applications far beyond ISIS.