You are here: Home / Analysis / Inside Iran’s push to get Hezbollah to take a role in Iraq 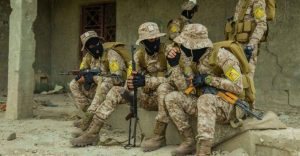 After the US killed Iran’s Islamic Revolutionary Guard Corps Commander Qasem Soleimani and Iraqi Kataib Hezbollah militia leader Abu Mahdi al-Muhandis, Iran has been feeling a vacuum in its “axis of resistance.” Iran now must reach out to Hezbollah to help it shore up its role in Iraq, according to recent reports, like reported by jpost.com.

Why is Hezbollah the go-to, with its thousands of fighters and base of support barely in the hundreds of thousands, when Iraqi Shi’ites number in the millions?
Middle East Eye first reported on January 14 that Iran had tasked Hezbollah’s Hassan Nasrallah to deal “uniting Iraqi proxies” after Soleimani’s death. Now Reuters has followed up on those rumors from a month ago regarding Hezbollah’s role in Iraq. “Two additional sources in a pro-Iran regional alliance confirmed that Hezbollah…has stepped in to help fill the void left by Soleimani in guiding [Iraqi] militias.”

The mystery surrounds the “Hezbollah will manage Iran’s affairs in Iraq” story and the mystery must be understood as relating to Iran’s trust in Hezbollah. In a time that Iran’s leaders now look to with nostalgia there were three men that anchored Iran’s power abroad. Qasem Soleimani, Imad Mughniyeh and Hassan Nasrallah. From Tehran’s point of view the “good old days” of the 2006 war against Israel brought them together. Now two of them are dead. Muhandis, a key Iranian ally in Iraq is also gone. It’s important to understand that these were trusted knights of the realm for Iran. They operated in Syria, which was key to Iran’s attempt to create a “road to the sea” via Iraq to Lebanon. Kataib Hezbollah, for instance, had a headquarters base in Albukamal until it was blown up in an airstrike in the summer of 2018.

Does Iran’s tapping of Hezbollah mean that it does not have faith in the Shi’ite base in Iraq and that it is concerned that months of anti-Iranian protests in Iraq might have damaged it? Perhaps it thinks Lebanese can operate in Iraq more easily now. Hezbollah sent Mohammad Al-Kawtharani to Iraq to negotiate after Soleimani and Muhandis were killed on January 3. Meetings followed in Lebanon and Iran. One goal was to bring Muqtada al-Sadr, leader of Iraq’s largest political party, together with Hadi al-Amiri, leader of the second largest party. Amiri is head of the Badr Organization as well and fought alongside Iran in the 1980s. As such the idea was to unite Sadr with Iranian-backed militias in Iraq. Sadr complied, ordering marches against the US in Iraq on January 24 and sending his blue hatted Saraya al-Salam to tamp down the protests on February 1.

But it’s not so simple. Sadr held meetings in mid-January in Qom in Iran with members of the Iraqi militias, the Popular Mobilization Units (Hashd al-Shaabi). Who was at the meeting? Akram Al-Kaabi of the Harakat Hezbollah al-Nujaba militia was photographed along with Sadr. But Kawtharani was not photographed there. Nevertheless Irib News showed a photo of the various flags of Iran’s proxies all united behind an image of the “martyred” Soleimani during the same week. Iran’s

message was unity and Hezbollah was expected to help.
According to Reuters Kawtharani has close connections to Iraq’s militias and, like Sadr, was born in Najaf. Soleimani would go to him in times of crises. Kawtharani was in Iraq and Iran in late December, according to other reports and Al-Hurra. He spoke to Amiri and went to Qom to speak to Sadr. This was prior to the major crises between the US and Iraqi militias which unfolded on December 27 when a rocket killed a US contractor. Kawtharani was trying to push the Iraqis to unify on a new Prime Minister choice.

The US Treasury department sanctioned Kawtharani in 2013. He was accused of being involved in “training, funding, political and logistical support to Iraqi Shi’a insurgent groups.” He was a member of Hezbollah’s Political Council and had helped free Hezbollah member Ali Musa Daqduq. Daqduq was involved in planning an attack that had killed five US soldiers in Iraq in 2007. Kawtharani had helped send fighters to Syria to support Assad after 2011, like Muhandis and Al-Kaabi. It might be assumed they worked closely on this issue.

Kawtharani was rumored killed by the January 3 airstrike. In  fact Jamal Jaafar Ibrahimi, asenior PMU member, was killed alongside Muhandis and Soleimani. Kawtharani was lucky, was Al-Kaabi, who the US has named as a key conduit for Soleimani’s network in Iraq.
The question now is what is the next step for men like Kawtharani and Iraq. The militias in Iraq have no shortage of members but some of their own families have joined the protests against Iran’s overbearing influence in Iraq. Sadr is constantly unsure of himself. Amiri and Qais Khazali, another militia leader, are either in hiding or rarely seen in public. Hezbollah is strained through its role fighting in Syria and challenges at home. Iran’s all-powerful proxy network appears to have some question marks at the top now. Reports about Tehran scrambling to get Hezbollah involved in Iraq point to a growing problem for Tehran in coordinating its efforts.